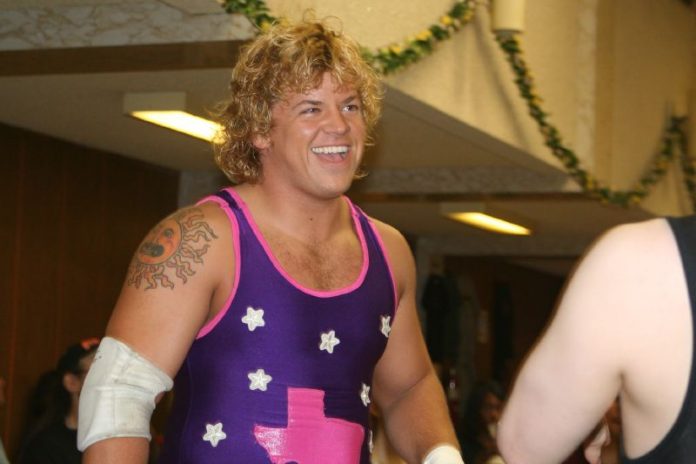 With as much fanfare as the past week had with the slew of independent shows in the Tampa area, as well as Wrestlemania with fans in the building for the first time in over a year, there’s finally a sense of optimism around the industry that was very affected by the restrictions of the pandemic. So much of the visual presentation and even something as intangible as the energy of a show is based on those in attendance. The crowd jumping for joy during Bianca’s emotional title win last night just added an extra level to the moment.

Unfortunately, there’s a somber note mixed in with all the entertainment spectacle, as today is the tenth anniversary of the death of Larry Sweeney, a charismatic and entertaining grappler that many thought was destined for a bright future in the industry. His star shined too bright as he strutted to the ring, attired in outlandish pink and purple outfits, for him not to be scooped up by a national promotion.

Tragically, that bright star extinguished suddenly and abruptly when Larry Sweeney took his own life at the age of just 30 after a long battle with bipolar disorder.

Even ten years later, I still remember exactly where I was when I received a text from one of my wrestling pals, Joe Folino, and completely shocked, I looked online to see if there was any confirmation of this terrible news. I didn’t even set up a Twitter page until the following year, but saw that Chris Hero, a friend of Sweeney, confirmed the news on social media. Alex Whybrow was a name I hadn’t heard before, but it was one that fans would hear numerous times as tributes from his peers poured in via social media in the aftermath of his passing.

Aside from how entertaining he was in the ring, his death hit me particularly hard because I had met him several times during the prior years through his work with Norm Connors’ International Wrestling Cartel. I was still in high school most of the times that I had talked to him, and he took my purchase of a $5 photo as something he was thankful for. I mean, sure professional wrestling has its reputation as a carny industry, but I can tell you that Larry Sweeney genuinely appreciated that I bought an 8X10. In fact, a few months afterwards, when I bought a second picture, he asked, “did you e bay the other one?!” with his trademark smirk. I informed him that I hadn’t taken his autograph to an online auction, but rather it had gotten smeared during the action of the show when I had purchased it so I was getting a new one. Sweeney insisted, despite my polite decline, to give me another autographed picture to replace it at no additional charge. Since he refused to take another $5 for the photo, I instead bought a trading card from him that he also signed.

Again, the genuine side of Larry Sweeney was too obvious not to notice. Despite the story of the origin of the phrase “$12 large, brother” during an intermission standing next to Tom Brandi, Larry simply didn’t try to scrounge every dollar, which is rare for independent wrestling. After I had met him and he continued to work for IWC, he often noticed my friends and I prior to bell time at the show. Once during an intermission, I went to buy an extremely overpriced mountain dew and a pretzel when the multi-time ICW/ICWA Texarkana Television Championship went jivin’ through the hallway. I didn’t want to bother him outside of the time fans usually had a chance to interact with the wrestlers at intermission so I didn’t say anything. Larry stopped and said “how ya doin’, pal?! Did that picture make it safe?” I was shocked he would’ve remembered or even taken the time to ask, but I told him that it was safely put in a plastic cover with the rest of my collection.

The day he passed, even as I was still shocked, I wrote a post for a college blog, an online class that was rather useless and used an antiquated program that was discontinued a few years later to build the site, but the rants about unnecessary classes to pad the tuition bill is another discussion for another time. The point being, I typed it in a quiet computer lab with a profound sense of sadness. How a performer that was so talented and a person that was so kind could pass away at such a young age under those circumstances just didn’t make any sense.

Today, through older eyes I can write this remembrance of the leader of Sweet N’ Sour International with less sadness and more of an appreciation for the performer that he was, as well as what could ultimately be learned through his passing. There will probably always be a stigma surrounding mental health, a very narrow-minded view point that completely misses the mark on so many levels. That said, in the time since Sweeney’s passing, the topic of mental health is much more discussed than in the past, even within the pro wrestling industry. Nobody wants to see another talented performer leave too early so some of the previously taboo topics are discussed with more awareness through social media.

Over the years, there has occasionally been a few fundraisers with Sweeney t-shirt with the proceeds donated to mental health organizations so his legacy has helped those in need of mental health services.

It goes without say that had he recovered from his mental health issues that Larry Sweeney would be on national television today. I’m not sure it would even be considered a “what if” scenario, simply because the almost unanimous consensus is that he was tailor made for national television.

When I wrote the original blog post in college, I typed it with total sadness, but I write this article ten years later with a smile because I think of the genuinely nice person and tremendously entertaining performer that Larry Sweeney was in the ring. The legacy of Larry Sweeney isn’t that his life was cut short, but rather a career build upon the ability to entertain. A legacy of entertainment seems very fitting for such a stellar perform that impacted many people throughout his career.