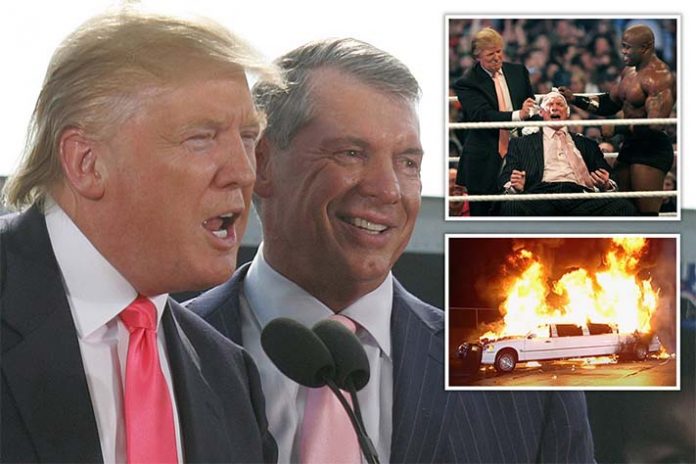 Donald Trump, the 45th president of the united states, and more importantly WWE Hall of Famer, has had a close relationship with Vince McMahon over the years. From appearances at shows and other events over the years to the famous “Battle of the Billionaires” match at Wrestlemania 23. The chairman’s wife Linda McMahon, even served in Trump’s cabinet during his administration. In 2008 the “Opie and Anthony Show” had on HHH in which he told a unique story about wrestling, involving a television angle that had Vince McMahon step into the backseat of his limo, only for the limo to blow up. The scene had multiple camera angles, and involved Vinny walking to the limo in a cinematic fashion, and cameramen shooting in specific angles, why am I mentioning the filming angles? We will get to that, as there is a lot to unpack here.

The stories of Vince McMahon can be detailed in a book like he didn’t know what a burrito was until a few years ago, he hasn’t watched a movie in over 20 years, or the fact that he had a match with, and beat up his daughter just weeks before her wedding on a PPV. I’ll mention Vince a lot during this story, but know that ultimately this story isn’t just about Vinny Mac’ it’s more about Donald Trump among others, and how the WWE worked him into a shoot in early June of 2007. Vince McMahon once had a match with GOD (seriously non-wrestling fans look it up) but as they say in the business, “GOD was going to get his heat back brother” on this episode of WWE programming. Vince McMahon has expressed his reluctance to be involved in WWE storylines and going as far as to actually kill himself with this exploding limo to write himself off of television forever!

The months leading up to this event, included Vince McMahon getting his head shaved as the result of the Wrestlemania 23 bout between his guy Umaga losing to Donald Trump’s guy Bobby Lashley in the Battle of the Billionaires match. The fallout of that match included Vince going on a full powertrip, and eventually even winning the ECW championship from Bobby in a handicap match. Durag Vince was peak Vince by the way. The ECW era was a dark, cold one, but durag Vince saved it. After weeks of consistently making a mockery of the ECW championship, Vince got a little cocky and lost it back to Bobby Lashley. Depressed, emo Vince was in full effect. Constantly mentioned how he had bad feelings, and people were out to get him, planting the seed that something was going to happen.

To cheer himself up, Vince made was going to be a “Vince McMahon appreciation night”

The whole company was there, as it was also the WWE Draft. It was made out to be a huge show. No appreciation was given this night though, as vignettes from celebrity friends like Jesse Ventura, and Snoop Dogg, Donald Trump was seen calling Vince “pathetic”. It was like the “roast” episode of “The Office” where Michael thought people say great things about him, but he ended up being distraught about the whole thing.

Vince left the ring, and walked around backstage, sad that no one appreciated him. He walks out of the building, with finally a slight satisfactory smirk on his face, and gets in his limo.

As he closes his door, the limo explodes, sending it into a million pieces killing the owner of WWE.

13-year-old me, thought this was real, as many kids under the age of 14 would. I guess that’s understandable with a limited worldview, and zero life experience, I still had my child-like innocence to believe any, and everything on television. Not knowing that WWE wouldn’t have a film crew, with sound and lighting walking with Vince as he got into his limo, not moving as the limo exploded, and also having multiple angles, someone like me as a 13-year-old wouldn’t take that into consideration, because it’s a television and at such a young age, you wouldn’t know any better. Donald Trump? Also thought it was real, 61 year old Donald Trump thought this television angle, that executives had to approve, was real. Because why would you stop the cameras?

Before I continue I will say that this storyline was scrapped almost immediately, due to the unfortunate Chris Beniot situation. 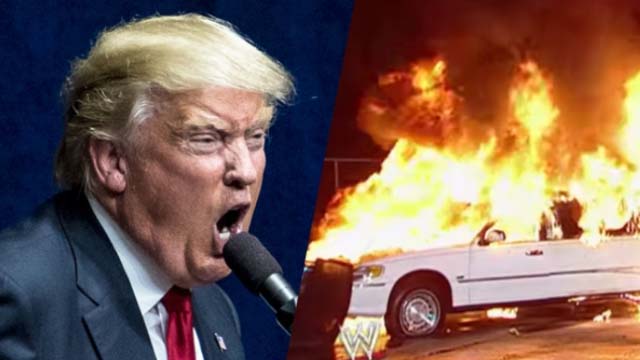 In 2008, on the “Opie and Anthony show” HHH went over how the fallout from this storyline affected people, like Donald Trump.

“Trump called and said ‘did something happen to Vince?”

WWE.com reported his death, that night and according to HHH, they got lots of calls, with people sending their condolences. The stock price even fell after the storyline.

My favorite stories, in wrestling, involve storylines that make people think that somehow it’s based in reality. That’s why the stuff with MJF, and even the Sasha and Naomi thing is so intriguing with fans. They love reality, and wrestling is sometimes more believable than reality.