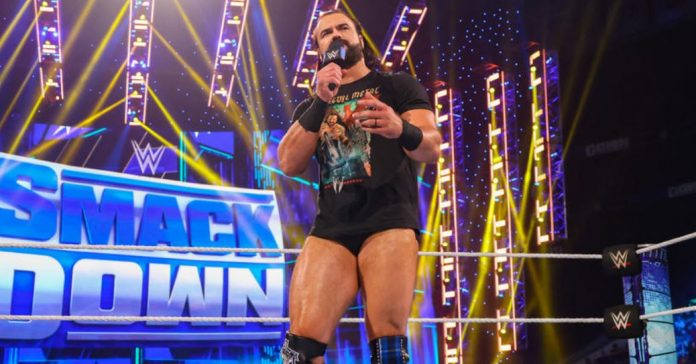 Another week and another overall positive week for WWE, and moving in the right direction. A good week of in-ring action too, mainly on RAW but even on Smackdown, a very good 5-way to determine the number one contender for the Intercontinental Title.

Drew McIntyre and Kevin Owens had a fantastic showing on the show, both delivering a phenomenal promo segment, and then going 20 minutes in a great match, which ended in a DQ after The Usos got involved. Neither man could really lose here so the result was fair but if this kind of in-ring action is going to continue, then I am all for it. Kevin Owens is finally getting a chance to show once again why he is fantastic. Bobby Lashley vs AJ Styles was also brilliant, once again showing why the U.S Title matters. Long may it continue.

Once again there was a show long narrative with things happening backstage, such as a rubbish bin being extinguished as it was on fire, someone being in a doorway behind Ziggler and Theory’s brawl in the first hour. Then Dexter Lumis shows up attempting to jump the barricade in the middle of the United States title match, in which he was then taken down by security. Again it looks like he’ll be targeting AJ Styles, why? That’s going to be the interesting factor here and something I am looking forward to seeing unfold in the coming weeks.

Judgement Day, I was thinking a few weeks ago this group would be demolished by Edge, but it could be a different story, they opened the show and as we know Edge vs Damien Priest will happen this coming week on RAW which should be great. But Damien Priest sounded very good in their promo this past week, it is clear that Triple H has let Balor, Priest and Ripley go out and be a little more free, which is helping them a lot.

I think the group may stay together for now, but Edge will beat Priest on RAW, then either we get Edge vs Balor at Clash at the Castle, or Judgement Day goes against Edge, Rey Mysterio and Beth Pheonix in a mixed tag match. Simply to even out the sides and pit someone against Rhea Ripley, not certain but it is possible.

The Intercontinental Championship once again gets meaning on the show, this time in a 5 way match to determine the number one contender. It was a great match, which involved Sheamus, Sami Zayn, Baron Corbin, Madcap Moss and Ricochet. Sami Zayn got a great reaction, as they were in Montreal, which is where he is from. Sheamus goes on to win the match and sets up a match with Gunther at Clash at the Castle. That match will be fantastic, hard-hitting, can not wait for that match.

Smackdown was partly centered around Sami Zayn, the hometown guy, he finally got his chance to speak to The Tribal Chief, Roman Reigns. These two should have more interactions, this was very good. It essentially boiled down to Roman telling Sami to send Kevin Owens the message that The Bloodline doesn’t owe him anything. With the history between Owens and Zayn this will eventually lead to them teaming together to take down The Usos once Sami is kicked out of The Bloodline and Owens convinces him that they never cared about him. Owens and Zayn win the tag titles then we go from there. I am excited for how this plays out.

The final segment of the show saw the face to face of Undisputed Champion Roman Reigns and challenger Drew McIntyre. It was great, by the end it broke out into a fight, where Sami Zayn took another Claymore from Drew, this time in place of Roman, but McIntyre ended up hitting it on Reigns and the show closed with Drew McIntyre holding up both titles. At this point, I doubt Drew loses this match, they’ve built it up so much, and like they have said on television, Roman Reigns is not on the show every week anymore, so it is hard to see him holding those titles past Clash at the Castle never mind holding them until Wrestlemania. So I think we are seeing the last weeks of Reigns historic title reign.

With Clash at the Castle only 2 weeks away now, there will probably be more announced for the show, and something like the Women’s tag title tournament will probably be concluded before the PPV, then with rumours of a draft after Clash, there’s excitement surrounding WWE.