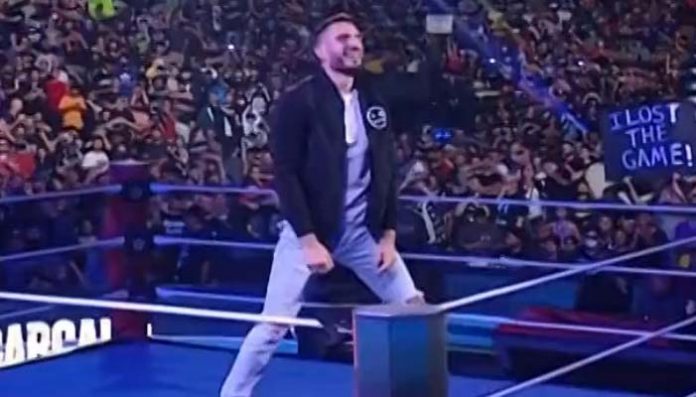 RAW and Smackdown this week were once again good shows, and now heading towards Clash at the Castle, with the go home shows to come, it will be exciting. Furthering the story of Dexter Lumis on RAW. On Smackdown the boiling point between Reigns and McIntyre is near.

Dexter Lumis continues the mysterious actions, however this time, he went after The Miz. Now obviously the question is why? I can’t say I know, because I originally thought it would be AJ Styles as the target. But after Lumis dragged the Miz away through the crowd after disguising himself as a security guard which was brilliant, Miz is now involved so what does mean for AJ Styles and Tommasso Ciampa? This could be a way to insert Ciampa into the feud and break up the pairing. Or Lumis could have multiple targets, I am very interested to see how this will play out.

JOHNNY GARGANO. It is fantastic that he is back, after so much speculation and rumours about would he come back or go to AEW? Triple H brought him back and it will be awesome. Got a great reaction from the Toronto crowd. A cool little detail was he returned in the building that he first won the NXT tag team titles back at NXT Takeover: Toronto, alongside Tommasso Ciampa as part of DIY. It looks like the program he’ll be starting with is against Austin Theory. Both guys were part of NXT faction The Way within the past couple of years. It seems like a very fun feud to start off with.

Edge vs Damien Priest. The big match that was promoted two weeks ago. It was a great match, really cool to see Edge wrestling on RAW and in his hometown. He got the win as you’d expect but obviously the feud continues. I said last week that Beth Pheonix could get involved, and it looks like that will be the case. As post-match, Finn Balor and Rhea Ripley got involved in a beatdown of Edge. She was front row at ringside, grabbed a chair and got in the ring. It was then a face-to-face between Rhea and Beth, so a match of mixed tag proportions seems likely.

Drew McIntyre got an amazing video package on the show, shown in two parts. First part showed his beginnings in WWE back in 2009 as “The Chosen One”. Then addressed the issues and fallout of his firing from the company a few years later. The second part showed his rise back through the industry, which resulted in his return to WWE and becoming a world champion. By the end of the show Drew got destroyed by The Bloodline, but even then, with all this build up behind Drew, it is becoming very difficult to see him losing at Clash at the Castle. Now it could still happen but its just the way he is being built up that makes me believe the Roman title run will be over come the PPV.

Sheamus and Gunther, big fight feel for the Intercontinental Championship match at Clash at the Castle. Great promo segment in the ring by both men, it all resulted in a brawl between Butch, Ridge Holland going after Ludwig Kaiser. Both Sheamus and Gunther just stared each other down. This match will be fantastic, and as Sheamus said in is promo, he puts on banger after banger after banger. I am sure these guys will be given the time, and when its done. It could be a match of the year.

The Sami Zayn and The Bloodline storyline continues, and it is one of the best things going right now. This week The Usos are back, and once again, Jey continues his frustration towards Sami. But it is clear that Roman continues to string Sami along until he does not need him anymore. When do they drop him? Chances are it will be soon and he could end up accidentally screwing Roman over, we’ll see how this ends before hopfully Kevin Owens gets involved.