In another good week for WWE, there was some really good things on both flagship shows for the company. Elevating their secondary championships, pushing new talent, and more returning talent that is very exciting to see. Here’s 3 takeaways from Raw and 3 from Smackdown this week.

Throughout the show, there was storyline running through, there was a car crash in the background of Kevin Owens promo, security seemingly chasing after someone backstage, and at the end of the show, security were stopping someone from getting over the barricade after AJ Styles won his match. In the end it was a returning Dexter Lumis, very exciting to see where this goes, but it looks like Lumis will be targeting Styles.

The United States championship match was fantastic, Tommaso Ciampa was shown like a star in that match against Bobby Lashley, even in defeat. The match even included a DIY tease with Ciampa using the Gargano escape submission in the match. From this I think a break-up of Miz and Ciampa is coming, in which Gargano will make his return and reform DIY. Lashley too, this looks to be the stages of a great run with the U.S title, excited to see where it could lead.

It looks like the character of Ezekiel has been written off television, which is a good thing, the character was not going anywhere and it seems Elias could be repackaged to his old gimmick. The big news here is Kevin Owens and his return to his NXT gimmick, which is exciting, especially after he hasn’t been doing anything of importance since Wrestlemania.

Another return, and on Smackdown it was Hit Row, they are back, obviously without Swerve, as he is with AEW, but  this is a great addition to the tag team division, making that stronger, and more names that were fired by the previous administration, only to be brought back by Triple H. This is fantastic, more names to the roster, and on the show, they got some time in a squash match, and then a post match promo. I love it, and I hope this reinvigorates the tag team division.

The Intercontinental Championship got a big spotlight on this show and it was great, between the match between Gunther and Nakamura being built up throughout the show. Before the match they showed a vignette hyping the importance and lineage of the Intercontinental Championship, this is fantastic, love to see the title being given importance. The match itself was also very good, Gunther retained but Nakamura had a great showing and even better, the match was in the main event of Smackdown and was made into a big deal, I want to see more of this and I think it will continue, which is hugely exciting.

The biggest thing on Smackdown this week was the interaction between Drew McIntyre, Karrion Kross and Scarlett, as well as The Usos. Karrion Kross got a promo segment, it was fantastic, targeting Drew and Roman, attempting to make an instant impact. I love it, making Kross into the big deal he should’ve been last year.

Drew McIntyre came out after for a promo segment himself, hyping the match at Clash at the Castle. Scarlett then comes down to the ring, all of a sudden from behind, The Usos attack McIntyre. Then we see The Usos tell Scarlett the tribal chief will take down Kross, she responds that Kross had the same message for Roman.

Later in the show, McIntyre attacks The Usos backstage, Sami Zayn was there but runs from the brawl. With The Usos annoyed about the attack they challenge Drew to a tag match, he accepts, with no partner to begin with but mid-match Madcap Moss came out to back him up. McIntyre wins for the team but after the match was where Sami took a Claymore from McIntyre, after pushing Jey Uso out of the way.

I loved the fact that the story between all of these guys involved was weaved beautifully throughout the show, it was brilliant, and this storyline between Sami and The Usos is very clearly starting to reach its boiling point, but maybe this has bought Sami some more time, or maybe it has angered The Usos more. The other question is what happens with Karrion Kross going into Clash at the Castle? 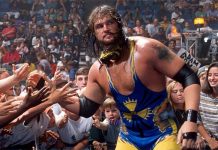