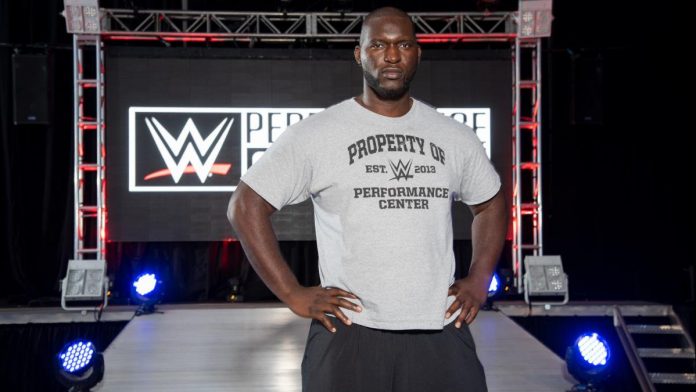 WWE may have found its next big thing. Literally.

Jordan Omogbehin, who is 7 feet 3 inches tall and weighs 370 pounds, made his in-ring debut at last night’s NXT live event in Lakeland, Florida.

The former Division I basketball player defeated the team of Scott Parker and Shane Matthews in a 2-on-1 Handicap Match. He made quick work of the much smaller Canadian duo, thanks to some powerful bodyslams.

Omogbehin was a surprise opponent for Parker and Shane Matthews, with Malcolm Bivens (formerly known as Stokely Hathaway) accepting the match on his behalf after they issued an open challenge.

Here are video highlights from the match, as well as photos.

hit that mf like button if you support a giant and his friend who just spent $340 on amazon for shoe lifts and timberland boots. pic.twitter.com/uoJUEGlixE

We have the in ring debut of @JordanOmogbehin w/ @StokelyHathaway vs. Team 3.0!

This is the biggest man I’ve ever seen. #NXTLakeland pic.twitter.com/5im5vVa9jz

Omogbehin was born in Lagos, Nigeria and attended high school in Maryland and Virginia. He began his college basketball career at the University of South Florida, where he scored 19 points in 33 games during limited action over two seasons (2012-2014). He transferred to Morgan State University in Baltimore, Maryland as a graduate student to play his final college season (2014-15), recording four points and eight rebounds in 10 games.