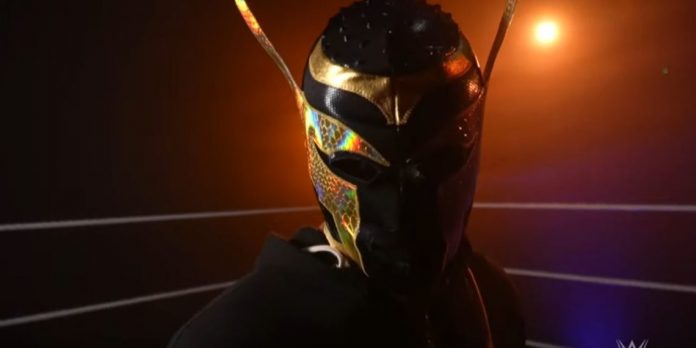 Axiom is returning to WWE NXT 2.0 with a mask on.

As was mentioned, the NXT Great American Bash show from last week included a vignette about the new character for the former A-Kid. He will now go by the name Axiom.

On this week’s NXT 2.0 show, a new vignette for Axiom was featured, and this time the former A-Kid was seen wearing a lucha-style mask. The new mask worn by Axiom is somewhat similar of those worn by late AAA Hall of Famer Abismo Negro and former WWE Superstar Sin Cara.

It was revealed that Axiom will make his official comeback debut next Tuesday night.

In this new vignette, Axiom discussed how he used comic books as a child to escape chaos and how he came to the realization that he could be his own superhero.

“When I was growing up, comics were my escape from reality,” Axiom said in the new vignette. “I could sit in my room and escape the chaos, slipping into a far away time or universe. As I learned to fight, I wondered if I could emulate my idols, take the leap from page to reality, I could be everything I always wanted to be, I could be my own superhero. Break free of the world I lived in and inspire others, I could be a symbol. I remain anonymous because it’s not about me, it’s about everyone else. I am Axiom.”

Axiom mentioned in last week’s promo that he was a very clever child who was bullied because of it along with other smart children. He decided to take action and learned how to fight back. He was aware that leaving his environment would be difficult, but he had a talent for mathematics and could, when he closed his eyes, convert anything to a formula. While it’s been mentioned that Axiom is technically gifted in the ring, he also stated in the first vignette that he thinks there is a solution to every problem. Whether it be a problem of mathematics or physics, Axiom believes there is always a way to solve it. Axiom ended the first promo by saying that when the body fails, the mind can propel you to new heights.

Early in March, WWE started airing vignettes in anticipation of A-Kid’s debut on the NXT 2.0 roster. On the March 15 broadcast, he made his 2.0 debut by defeating Kushida in what turned out to be his last singles battle for the business. After losing to Grayson Waller on the NXT 2.0 show on March 22, A-Kid worked a Triple Threat match alongside Roderick Strong and the winner Cameron Grimes on the episode that aired on March 29.

Since that Triple Threat on March 22, A-Kid has been sidelined from NXT 2.0. He lost to Charlie Dempsey on the March 10 NXT UK show before making his NXT 2.0 debut on the March 15 show. The next NXT UK shows, which were taped around the time of his singles defeat to Dempsey, saw him team with Saxon Huxley for a loss to Dempsey and Rohan Raja as well as a loss to Teoman. After the final NXT 2.0 Triple Threat, A-Kid traveled back to England to work the NXT UK TV tapings in late April. He lost against Dempsey once more in a British Rounds Match that was shown on the May 26 broadcast, carrying on the feud with Die Familie. Since losing to Dempsey on the May 26 show, A-Kid, now known as Axiom, has not been seen on WWE TV until recently.

A-Kid is thought to have been rebranded as Axiom because, prior to being signed by WWE in April 2019, he went by the name A-Kid internationally.

Axiom’s official re-debut opponent has not yet been announced, but we’ll keep you informed.