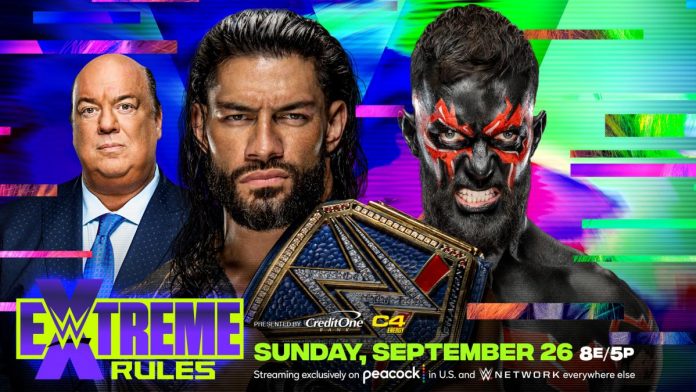 With just six matches announced, Extreme Rules went on the air last night, in a few different languages. As much as I enjoy occasionally hearing the bass voice of Carlos Cabrera during the typical introductions of the foreign language announce teams, I thought I must’ve somehow pushed what I eventually realized was a non-existent SAP button on the remote when the Spanish broadcast was heard during the opening of the show. I could be wrong, but I think there was also a brief time when the French broadcast was heard as well and if so, here’s a shout out to Ray Rougeau. Liv Morgan defeated Carmella in a contest that was shifted to the pre-show and it somewhat gave the impression that this pay-per-view was either thrown together simply because a PPV was on the schedule or it’s viewed as cannon fodder before Survivor Series.

It was announced that a six man tag team match was added to the pay-per-view, still keeping the total of six matches on the main card. The New Day defeated AJ Styles, Omos, and Bobby Lashley. There are a few takeaways from this bout that say a lot about not only the booking of this show, but also the general direction or lack thereof with the brand. The WWE champion in the opening match, especially when it’s not something like the HIAC event, where it makes sense to pace the gimmick matches, gives the impression that the title or the champion is secondary. Furthermore, this tag match would fit with an easy booking for a Raw main event more or less for any random episode so how exactly is that considered PPV worthy?

The concept of television matches that just happen to be booked on a pay-per-view was a common theme throughout the event.

The finish of the six man tag saw Big E pin Lashley and then in a post-match promo challenge him for the start of Raw tonight. I’m all for the fighting baby face champion, something that WWE doesn’t usually book well, and I understand the logic of trying to get viewers to tune into the show early to try to prevent the competition from Monday Night Football, but the audience just saw Big E pin Lashley so what exactly is the draw to watch it again the next night?

There’s not much to say about the Smackdown tag team title match. It was fine, but again, it was a television match that just happened to be on a pay-per-view. The action was entertaining and the teams work well together, but considering their previous bouts on Smackdown, this literally was just a retread from TV matches. The Usos retained, but as long as the Bloodline is the main angle on Smackdown, it’s doubtful there will be a title switch.

The good news is, Charlotte Flair vs. Alexa Bliss was a very good Women’s title match that showcased the skills of both athletes very well. Flair and Bliss are two great performers that should be staples of the division because they add a lot of depth to the Raw brand. Charlotte was always talented, but showed some inexperience during her first few years on the main roster, which isn’t meant as a criticism, but rather to point out the stage of her career at the time. That being said, she’s really just starting the prime of her career and that speaks volumes to how talented she is as a performer because she took her natural athleticism and learned to blend it into sports entertainment. The bad news is, the ridiculous angle for this match overshadowed both of these talented competitors. Alexa Bliss is doing the best that anyone is probably going to do with such a ridiculous gimmick, but it’s still just cringe worthy. That’s not a jab against her, but rather the situation the writing team books for her on almost a weekly basis. The finish saw Flair retain when she used the doll to distract Bliss, which is completely counterproductive to the promo from last week where Bliss hyped the title match. An audience is supposed to believe that the doll is more important than the championship? The post-match meltdown showed that instead of “foaming at the mouth,” which is gross anytime, not to mention a pandemic, you could clearly see that Bliss had an Alka Seltzer tablet in her mouth. At least she won’t get indigestion. However, the audience might after watching this circus.

The US title match was fine and Damian Priest retained. While it was obvious that Jeff Hardy was just there to take the pin, it shouldn’t be understated that he’s still one of the most over performers on the roster. Despite the 24/7 title nonsense and being booked like a lower mid-card guy recently, Hardy still has enough gas left in the tank for another main event run as a challenger for a heel champion. In fact, all three of these athletes are some of the most solid wrestlers on the roster, but the US title was considered secondary for years so this bout just didn’t have the hype around it before the show.

Similar to the Raw Women’s title bout, the Smackdown side of the division had two very talented wrestlers with a finish that took away from their performance. In a recent article, I discussed the misuse of the hometown baby face to build this match, but the bigger point is, Bianca and Becky are two top notch wrestlers. The fact that Becky is being miscast as a heel upon her return is a booking problem, not a Becky problem. If WWE brass didn’t want either of these competitors to do the job then the simple solution is not to book the match in the first place. Sasha making yet another return is a recycled concept and doesn’t have the sizzle it did prior to this. The DQ finish on a pay-per-view, regardless of the Peacock era when shows are either free or $4.99, is a flat conclusion to a title match. Theoretically, the pay-per-views are major events and where winners are determined. Becky was one of the most over competitors in the company when she left, but she returned as a marginal heel. Bianca was near the level of the top women’s wrestler on the roster, but is a mid-level baby face now. Nothing management has done with this angle has maximized the skills of those involved, and that speaks to a much bigger problem within the WWE landscape.

Roman Reigns vs. Finn Balor was a quality main event, until the finish. I’m sure you’re noticing a pattern with this show. The problem was, nobody in the building believed that Finn was going to win the title. The finish with the red lights and Finn randomly being revived based on the beat of the music was just hokey. It’s one of those situations where wrestling fans are embarrassed to watch wrestling. Finn Balor is another wrestler on the roster that hasn’t been fully utilized and even this main event spot will be known for the goofy special effects. Balor was so mismanaged that he returned to NXT for a stint that was designed to try to beat AEW in the ratings more than to rejuvenate his career. As far as Finn back on the main roster, where does he go after a goofy finish like that? Granted, Balor makes good money and appears to be at the latter stage of his career so there’s really no reason to ponder a jump to AEW, but it’s still disappointing that he’s underutilized in the WWE.

On a show where there were a fair share of glaring mistakes, prehaps the biggest mistake was to book a pay-per-view called Extreme Rules without almost anything extreme on the show. Keep in mind, I’ve written for years that using gimmick pay-per-views is a major mistake because an angle, not the calendar should dictate if gimmick matches are booked, but if management is going to schedule a gimmick pay-per-view then there should at least be stipulations booked for the event.