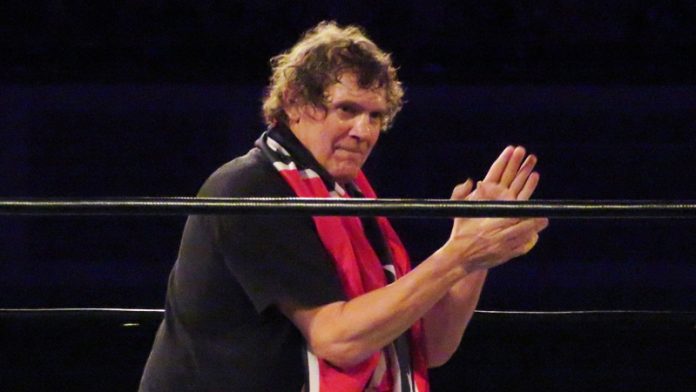 I wasn’t sure if or when I’d write this article, simply because it’s such a somber subject. Still, as I type this, I find it difficult to find a focus because of how sad the situation is, as last week I saw on Twitter that underrated legend, Tracy Smothers passed away after a long battle with cancer. It wasn’t surprising news since Tracy had been sick for almost a year and last month news surfaced that he was in the hospital from ailing health. Before the pandemic, a photo was posted online of Tracy at an independent show and he looked very frail from the effects of cancer treatment. Despite the gloomly status of the situation, my heart sank when I saw the tweets that commented on his passing, mostly for the same reason as those tributes were made on social media, Tracy was such a talented and nice guy.

I could go through his career of wrestling bears in the 80s, stealing the show in tag matches on WCW pay-per-views in the early-90s, working as the top baby face in Smokey Mountain, dancing in ECW, or his status as a beloved veteran on the indy circuit in the 2000s. However, most of that information will be chronicled in my other places so I’d like to discuss a few personal memories of the native of Nashville, Italy.

In 2004, ECW had closed a few years previously and XPW collapsed the year prior so Tracy, a gritty veteran with over 20 years of experience by that time had become a fixture on the independent circuit, working cards on a regular basis as he zigzagged from the east coast into the mid-west when he wasn’t riling up crowds in Tennessee. In the years since, performers that were just aspiring hopefuls at the time have cited Tracy Smothers as one of the most insightful and helpful veterans on the indy scene. As mentioned, Smothers had done it all in his tenure after he broke into the industry in 1982. He worked the sideshow matches with the bear, he worked on pay-per-view, he cut fiery money promos, he could incite a crowd, or he could work an effective comedy match. Tracy was a wise sage of wrestling knowledge and taught those lessons to the future generations, which were ultimately some of the athletes that excel today.

The previously mentioned 2004 was when I had the chance to see Tracy live when he was booked for a Norm Connors’ International Wrestling Cartel event in West Mifflin, PA. IWC, the successor to Connors’ Steel City promotion from the late-90s, was a unique mixture of local talent and well-known indy competitors. At the time, IWC was generating a cult following and there was a time in the 2 or 3 years that followed that the organization might’ve had a chance to make a footprint outside of just the Pittsburgh area. Considering that DVDs and message board chatter were still the main way indy leagues picked up steam, for whatever reason, IWC didn’t seem to get the hype of some of the other organizations. IWA Mid-South might’ve made headlines for setting someone on fire or glass slicing a wrestler’s artery in front of 43 fans, but I’d say that the IWC product during that era was a better quality show. It wasn’t uncommon for AJ Styles, Christopher Daniels, Chris Sabin, and CM Punk to appear on those Norm Connors shows.

This particular night, Southern Comfort, the tag team of Tracy and fellow ECW alumni, Chris Hamrick, were scheduled for their IWC debut against Jimmy Jacobs, still in his furry boots phase, and “Fabulous” John McChesney, an underrated wrestler in his own right. This show was just a few days before my 15th birthday and despite shoveling snow for a few dollars the previous week for admission to the show, my dad was nice enough to pay for a ticket as a birthday gift. I was so pumped to see AJ Styles, CM Punk, and the rest of the roster on the show. I knew Tracy from the FBI and knew he had wrestled for WCW and WWF before that, but didn’t know what to expect from Southern Comfort as a tag team. I had only seen Hamrick briefly in ECW, mostly from the insane clips of matches he had with Kid Kash. Southern Comfort as a team was probably the only good concept that emerged from the abysmal failure of XPW.

As Tracy and Hamrick bounded through the curtain of the community college gym, the tightly-packed crowd erupted. The memories of Pittsburgh as an ECW stronghold was still fresh in most of the fans’ mind. I started attending IWC events in 2003 so I knew Fabulous and Jacobs could go in the ring. A classic heel, Tracy got on the mic before the bell and attempted to insult the audience, but the crowd was so happy to see him, the jeered from the rasslin veteran generated more applause from ringsiders. In true Tracy fashion, he began dancing to the pattern of the cheers before he continued heelish gestures in the general direction of the crowd.

Rest in Peace Tracy Smothers. I remember seeing him back in 1990 at the GAB in the match w/ Midnight Express. Then I saw Southern Comfort (Tracy and Chris Hamrick). I knew I had to get them as a tag team This was their debut. He will be missed. https://t.co/emweUz2Eq7


The actual match was great, and the opening exchange set the tone for not only that particular bout, but represented the buzz that the organization as a whole had at the time. McChesney and Hamrick exchanged a fast-paced series of technical maneuvers before it resulted in a stalemate, prompting another ovation from the audience. If you watch the video of the match, you can see a young Jim clapping with enthusiasm from the wrestling display. The finish saw Hamrick hit Jacobs with a ridiculous second rope pile driver. When watching the match again on IWC TV on the local WBGN channel, I remember hearing a young Joe Dombrowski yell “Southern Bell Ringer!” just moments before the ref counted three, declaring Tracy and Hamrick the winners.

Ironically, I was on the mic with Joe for a different promotion on the same channel years later. Similar to the way that Tracy taught wrestlers, I learned a lot working with Dombrowski and wouldn’t be the commentator I am today (however decent or terrible that might be) without his advice during the first few years I started doing commentary for local Pittsburgh shows.

The successful debut made Southern Comfort a regular act for Norm Connors and I had the chance to meet Tracy a few times over the next few years. I bought a picture to get signed from him at one of those shows and at the following event I brought along a few WCW trading cards to get autographed. When I asked him what it costs to get the cards signed he said, “oh, nothing, man, you brought ’em I can’t charge for that.” In December of 2004, The Midnight Express was on their reunion tour, working memorable matches as the original duo for the first time in years after Dennis Condry abruptly quit the business. My dad, being the good man that he is, again came through and took me to the show, despite the fact that he smoked more cigarettes outside than watched matches inside the venue. Southern Comfort wrestled The Original Midnight Express, and even though I was really excited to see the bout at the time, I’m even more thankful for the chance to see Eaton and Condry live as I reflect upon it being older now. After the show, as we were leaving, Tracy was selling merchandise at his table. He recognized me and while I didn’t initially plan to stop since I didn’t want to bother him if he was busy, when he saw me he said, “how you doin’?” I said, “I’m good, Tracy. That was a great match, you’re the man” He smiled and said, “I’m a heel , though so don’t tell nobody, man” We took a picture together and the genuine smile on his face showed that he took the time to say hello to me because he really appreciated the compliment.

Very sad to hear that Tracy Smothers passed away. I had the chance to meet him a few times at @NormanConnors IWC shows several years ago & he was always such a nice guy. He's an underrated legend RIP Tracy Smothers pic.twitter.com/vvZ1rl3toB


That’s one of the reasons that Tracy was so great because he was always such a down-to-earth individual. He also had one of my favorite matches of all time a few months later at a random Sunday afternoon IWC show in McKeesport, PA in 2005. Smothers challenged Shirley Doe, one of the most accomplished and respected veterans of the Pittsburgh area. Generally, fans assume that the IWC championship was a title to spotlight the local guys so when they defended against a national name, it was usually a safe bet that the local wrestlers would retain it. Doe, who I’ve been so thankful to be able to call matches for and more importantly, consider a friend during my time as a commentator, is cut from the old school cloth. Somehow, on a chilly February afternoon, Tracy and Doe put together a match that had moments where it looked like it was very possible that Smothers would capture the belt. All assumptions about the “local title” were questioned as fans were on the edge of their seats and reacted to each near fall during the course of the contest. The ability to create moments where the result of the match is in doubt is the mark of a true pro, and both Smothers and Doe made that title match stand out as much more than just a typical title defense.

Tracy Smothers’ extensive career speaks for itself. He’s a gem of the wrestling business and he undoubtedly deserved more credit than he received during the prime of his career. It’s so sad that he passed too soon and suffered with cancer. But, I hope that his memory and matches continue to make people smile because he entertained so many fans throughout his nearly 40-year career.