It’s not too surprising that the hardcore legend cited an education as a fall back plan to those that decided they wanted to pursue the often unpredictable and unforgiving career path of sports entertainment. Mick’s mentor and trainer, the legendary, Dominic DeNucci told Foley’s fellow trainee that if he wanted to learn the grappling arts, he had to complete his education. Foley’s classmate between the ring ropes at a small building in Freedom, PA was Pittsburgh native, Shane Douglas.

When it comes to professional wrestling and education, another grappler from the steel city chose to blend the two for his senior project in high school, a decision that would ultimately have a major effect on the direction of his life.

Chris LeRusso, a nearly 18-year pro, attended an independent wrestling event during his impressionable high school years and was shocked to see that the athletic spectacle that he was obsessed with since his time in kindergarten could actually be seen live in the town where he lived.

“When I was in high school in Altoona, PA, I saw my first independent wrestling show at the Frankstown Armory. I had never been that close to the action and for the first time, the ring seemed within reach, Figuratively and literally,” LeRusso explained.

With professional wrestlers in his area code, LeRusso sheepishly asked the promoter of that armory event for an interview for his school project. That promoter was Ken Downs, a now-retired wrestler that has worked in the industry in some form or fashion through either performing or promoting for nearly 23 years. By 2003, when Chris still had to get his homework done before he could energetically dart out the door to head to the local matches, Downs was promoting cards under the Keystone Championship Wrestling banner, an organization that ran successfully in central PA for several years. Eventually, Chris garnered the courage to ask Downs, known in the ring as Kato, about his training center, which was a fixture of KCW events as many of his students were staples of the promotion.

The newbie realized that the tedious process of learning to land on the canvas wasn’t quite as glamours as watching the Ultimate Warrior ricochet off the ropes when he was a youngster, but he was so invested in the journey that he soaked up the in-ring knowledge like a sponge.

“Chris was still in high school when I first met him. He started training with me shortly after graduation,” Downs said.

“Kato’s training focused on the psychology and mental aspect of training just as much as the physical aspect, if not more so. I can still remember him saying over and over again ‘there need to be rhyme and reason to the heat.’ So even early on, I appreciated the storytelling and making the matches make sense,” LeRusso explained.

Just as 2003 was coming to a close, a nervous, but excited “Chaotic” Chris LeRusso bounded to the ring for his debut match, his attire and mannerisms innocently borrowed from Rob Van Dam, an athlete he cites as one of his early influences. Despite the nervous energy after the opening bell to his wrestling career, the 18-year-old LeRusso showed a lot of pose and potential, especially for his first match in the same venue that started his journey prior to that. He spent the next few years doing what a majority of hopefuls have to do if they want to make progress along their path, he gained valuable experience to become more seasoned as a competitor. He made the car trips and zigzagged around the tri-state arena to whatever show he could, no matter how big or small, to get the chance to perform in front of an audience. Sometimes those reps were taken for a sparely-attended card in the middle of nowhere in West Virginia or for a packed house back at the KCW armory. Either way, Chris saw each event as a way to better himself as an athlete.

When he wasn’t hitting the mat, Chris hit the books, as he did his under graduate studies at Pitt University, graduating in 2007 before he was accepted into law school at Duquesne University, where he passed the Bar Exam in 2010 to become lawyer. Today, when he’s not physically pummeling opponents in the ring, he body slams foes legally as a practicing attorney. As is the case for many wrestlers in their formative years, he began to branch out from central Pennsylvania toward the Pittsburgh area, becoming a regular for the now-defunct Pro Wrestling Express organization, as well as other groups based around the steel city. However, balancing the law and the lariats during his period of higher education proved to be extremely difficult. It wasn’t uncommon for LeRusso to arrive home very late on a Saturday night from a wrestling card and have to dive into school subjects just a few hours later to study for a test on Monday.

“Balancing law school and wrestling was one of the hardest things I have ever done. I took a few months off to study ahead of time. In a weird bit of crossover with my wrestling career, the security guard of the building where I took the bar exam was Gentleman Joe Perry, a manager for years in the Pittsburgh area. Even when about to begin my legal career; I couldn’t quite escape my wrestling side,” LeRusso commented.

“I have fond memories of my time at PWX. Working with Quinn Magnum taught me a lot about booking and I made some great friends during that time like Jack Pollock. PWX ran very often and working that often made me a much better wrestler,” he added.

Without the pressure of the Bar Exam hanging over his head, Chris sought higher education between the ropes, investing in himself when he enrolled in a series of Ring Of Honor seminars, three-day training sessions designed to evaluate potential talent. Betting on himself paid off, as he has worked a handful of ROH dates over the years, including on television as an entrant into the Top Prospect Tournament in 2017, an occasion that he considers one of his career highlights.

“The ROH camps were a fantastic opportunity to learn and be pushed out of your comfort zone. Kevin Kelly taught me so much about promos, Truth Martini about psychology, Steve Corino and Delirious about in ring work and the business in general. Participating in the Top Prospects Tournament in Pittsburgh was one of the great honors of my career. I got to share with ring with Fish and O’Riley, Josh Woods, Tommaso Ciampa, Moose, Cheeseburger, and others during my time at ROH. For that, I’ll always be grateful to Ring of Honor. Part of me hopes that I haven’t had my last ROH yet and I have a chance to return in the future,” Chris remarked.

Great to see @KINGCorino ; talkin shop and baseball. Next time you're in pgh, I'll have pirates swag for Beck pic.twitter.com/Ca7Qt0AmF3


With the recognition brought along from the ROH appearances, LeRusso became a regular with the International Wrestling Cartel, one of the largest and longest-running promotion of the region, and has spent the past five years of his career calling the organization home.

“I think IWC’s role in Pittsburgh has always been as a launching pad. While it has always featured fantastic local talent like Shirley Doe, Dennis Gregory, Jimmy Vegas, and others; it also featured traveling indy stars like CM Punk and AJ Styles and trained future superstars like Elias. I have a feeling that a lot of the young talent you see on IWC today will one day be seen on much larger stages,” he said.

Within the past few years, Chris saw things go full circle for him, as he became the head trainer of the IWC training academy, a place where he instills the fundamental lessons to rookies that Kato once shared with him. At this point, LeRusso has spent nearly half of his life involved in the sport and he wouldn’t have it any other way. More recently under the IWC banner, LeRusso aligned himself with a stable known as “The Regulators,” a group determined to draw the jeers from the audience.

“The Silver Bullet is Smoother than the finest whiskey. I would’ve never been IWC champ without LeRusso, he’s the best tag partner I ever had,” proclaimed Jock Samson, one of LeRusso’s stablemates in the faction.

“Chris has evolved into a confident man. He believes in himself and his ability. As wrestlers, confidence in yourself is your greatest asset,” Ken Downs commented.

“My career is going through a new phase where I honestly think I can do just as much as a coach and trainer for the business as I do as a talent. I am so proud and impressed by my students. I was always told that the greatest honor a student can pay a teacher is to surpass them and I good number of my students have already paid me that honor. I want to leave the business in a better place than I found it. If it’s a wrestler, backstage agent, in creative, as a trainer, a mentor, or a good brother, I just hope I can help the sport I love so much,” LeRusso said.

“LeRusso is incredibly talented as what he does in the ring against his opponents, but I think his lasting legacy will be the knowledge that he passes on to younger talent. His track record as head trainer of the ICWA speaks for itself, and I expect his accomplishments as a teacher to grow exponentially in the years to come,” said Justin Plummer, the promoter for IWC events since 2014.

LeRusso’s next bout is scheduled for this weekend’s IWC card in Elizabeth, PA where he plans to kickoff another successful year in the industry. Perhaps the biggest lesson that can be taken from LeRusso’s path into professional wrestling is for those that dare to dream to take a shot at it and give themselves a chance to achieve it. Chris LeRusso’s decision to muster up the courage to ask about training to be a wrestler at that Frankstown Armory created several year of memories in the industry. 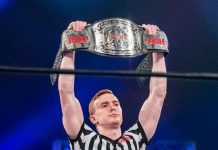