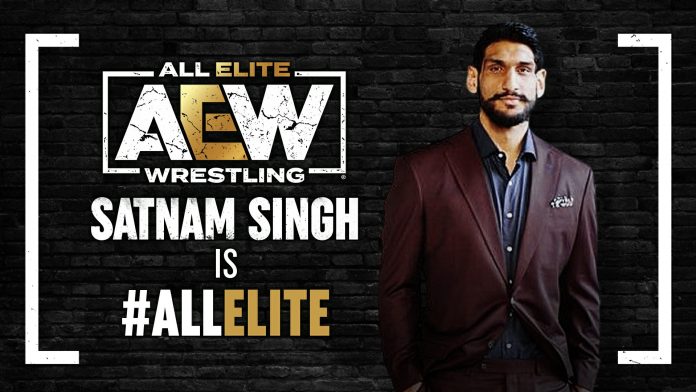 AEW has announced the signing of former NBA basketball player Satnam Singh from India, who was drafted to the Dallas Mavericks in 2015 before being bounced around to various minor leagues. He has not played since 2019.

September 23, 2021 – All Elite Wrestling (AEW) today announced the signing of Satnam Singh, an international phenom best known as the first-ever player from India to be drafted by the National Basketball Association. The 7’3” Singh was drafted by the Dallas Mavericks in 2015, and now brings his natural athleticism, charisma and daunting stature to AEW.

Singh follows in the footsteps of NBA legend Shaquille O’Neal, who squared off alongside Jade Cargill in a mixed tag team match against Cody Rhodes and Red Velvet on “AEW: Dynamite” in March. Singh will begin training at the world-class, Atlanta-based Nightmare Factory, run by QT Marshall and Cody Rhodes.

“While we’ve recently secured some of the hottest free agents on the planet, I’m also deeply committed to cultivating our own homegrown stars and the next generation of extraordinary professional wrestlers,” said Tony Khan, CEO, GM and Head of Creative of AEW. “In addition to Satnam’s commanding 7’3” stature, I was impressed with his high level of athleticism and charisma. He’s an exciting addition to our roster, and I’m looking forward to our fans getting to know Satnam’s personality and watching his development.”

In early August, AEW began broadcasting weekly episodes of “AEW: Dynamite” and “AEW: Rampage” on Eurosport India, joining more than 120 countries watching AEW worldwide on broadcast partners and via AEWPlus. The signing of Singh also comes at a momentous time for AEW, fresh off the wildly successful ALL OUT pay-per-view, its red-hot debut in the NYC market, and the lauded signings of CM Punk, Bryan Danielson, Adam Cole and Ruby Soho.

With two nights of programming on TNT, and substantial digital content available weekly, AEW continues to solidify its position as the fastest growing and hottest professional wrestling promotion. This week, AEW features four hours of programming on TNT from the USTA Billie Jean King National Tennis Center in Queens, NY, starting with “AEW Dynamite: Grand Slam” on Wednesday, Sept. 22, at 8 p.m. ET, and a special two-hour presentation of “AEW: Rampage” on Friday, Sept. 24, at 10 p.m. ET.