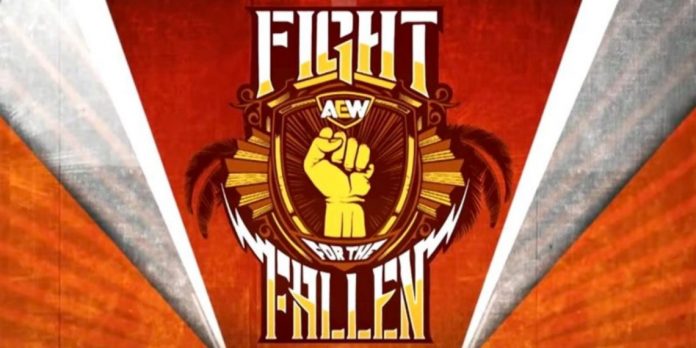 In a big AEW dynamite the show starts off with Jon Moxley defending his AEW championship against Rush, the man who beat Dragon Lee at this past weekends ROH Death before Dishonor pay-per-view.

In a contrast to the past few weeks, Jim Ross was on commentary for the whole show, as compared to the second hour of dynamite only. William Regal also came out for commentary for the match as he usually does for matches involving Blackpool Combat Club members. I think Regal on commentary is brilliant, always gives great insights and just so entertaining to listen too.

They had a really good match, Rush came off looking fantastic and as someone who could challenge for the title in the future again. He came right out of the gate at Moxley which I love, it makes him seem like a legitimate threat while also giving Moxley a fight to battle back in. During the match Moxley bled, Rush had a lot of offense in the match. Andrade got involved near the end. The Lucha Brothers then come out as they have had their issues in recent weeks. Moxley wins with a bulldog choke making Rush pass out and retains the title as expected.

The Lucha Brothers and La Faccion Ingobernable have been on a collision course for a while now, and could result in a match only this time with the rule about the masks being pulled off that is used in Mexico. Being the result as the mask being pulled off has been a theme between these two teams.

After the match Chris Jericho comes out and challenges Moxley to an AEW championship match, and with Punk’s status up in the air for All Out right now, this is a brilliant move. Having the first two AEW champions go at it.

A talking point from last week’s show was Anna Jay and her heel turn, and she started out alright on the show and will be interesting to see where they go with her. Later in the show they announced a match with her and Ruby Soho.

Moxley has cut amazing promos in the past and the one on the show was no different, the intensity he brings is incredible. He said he wanted “Lionheart” Jericho to face him, and if we are going to get to see that, I am highly interested, Jericho is doing some of the best work of his career right now, and whenever Jericho throws back to his past, it is fantastic.

The Trios titles are here! After so long, many reports over the past few months, they were unveiled and look fantastic. The inaugural champions will be crowned at All Out, and I would like to see the House of Black be the first trios champions, they have a great act, a great look, and lets get Malakai Black with a championship, I would love to see it.

Dante Martin got some time for a promo backstage, nice to see him on dynamite again, hyping his match with Sammy Guevara and announcing Skye Blue would be in his corner.

This is where one of the bigger moments of the show happened, Ricky Starks last week held an open challenge for the FTW championship, he beat Cole Karter. This week it was Danhausen who wanted a match, he got it, it was short as expected. This week though, Starks did have a second open challenge.

Who else came out but Hook. Fantastic reaction, he is so incredibly over, and the dynamics were very interesting, with Hook still being a part of Team Taz, just doing his own thing. Again a short match, but Ricky Starks facial expressions can not be understated, the guy is fantastic at what he does.

Hook ends up winning the FTW championship, a show of respect after the match between Starks and Hook. After commercial break, Starks cut a brilliantly impassioned promo about how good he really is. Then is one fell swoop, Hobbs batters him from behind in a big shock. An interesting part of this being Taz on commentary who could not believe it.

It looks like they are setting Starks up to have a big babyface push with Hobbs as the mega heel, with Team Taz possibly being no more. I am looking forward to see where this leads.

Dante Martin vs Sammy Guevara was just great, the athleticism on display was incredible, no matter how many times I see Dante Martin, I am always impressed, the guy has got so much ability and talent and is obviously being set up as a future piece of the company.

Even though Sammy is better off now than he was just a couple of months ago, he does feel slightly directionless, however he did win this match. I would like to see him in an interesting story, that may be something they are heading towards. Sammy and Tay went for a post match beat down, which Anna Jay joined in on. Then Eddie Kingston, Ortiz and Ruby Soho came out for the save. This could set up a mixed 6 person tag with Sammy finding a partner, or a normal mixed tag with Sammy/Tay against Kingston/Soho.

After last week’s return Jungle Boy is back on dynamite for a promo segment, he starts out brilliantly with the line “Christian Cage, you are the biggest p*ssy I have ever met in my entire life”. Absolutely brilliant opening line, got straight to the point and it is very obvious Jungle Boy has gotten better at his promo ability, which is great to see.

A very interesting detail was Luchasaurus, he came out with Jungle Boy but came out in his black heel attire. So i just wonder if this is all a ploy on Jungle Boy in order to have him go through those challenges to get to Christian eventually. Definitely something to keep an eye on.

So Christian eventually pops up on the screen in the back talking more about how he perceives Jungle Boy to have failed him. More personal lines are thrown about. A nice detail I like was Jungle Boy and how he was wearing the jacket that Christian put over him after he attacked him a few weeks ago. That attention to detail is fantastic. In my opinion, Christian is the best promo in AEW right now.

I think some of this is going to come down to what Luchasaurus does, his few week run a Christian’s heavy was great, and I feel that they are just going back to square one if they pair Jurassic Express back together. But in this case giving it time might be the best thing here because there is still a few weeks left till All Out. I still think it is a ploy by Christian.

The Young Bucks lost the tag team titles two weeks ago, Adam Cole, Kyle O’Reilly and Bobby Fish are still not back yet. So there was a question mark hanging over them. With the reports that Kenny Omega could come back soon and now the Trios titles have been introduced, they could feasibly do a couple of things.

One thing that was teased on the show was Hangman Adam Page and the Bucks reunion of sorts after running into each other in the back. The Dark Order interrupted leaving something open possibly for the future. Later on it was announced the undisputed elite would be on dynamite next week. Possibly giving an indication of where they go into All Out.

Swerve is in a 2 on handicap match with Smart Mark Sterling and Tony Nese, the match was not very long but what happened afterwards was the important part. Keith Lee was in the back as he was banned from ringside. Then after the match Josh Woods, the former ROH Pure champion was seen standing over Lee with Lee’s tag title in hand. Swerve sees this after the match Lee is down which gives Nese a chance to attack Swerve from behind.

Is this a formation of a new tag team between Woods and Nese? It could be interesting, with other tag teams occupied, it can be a good opportunity to do something different. But I still think FTR are the team that will be going for the tag team titles at All Out, because it only makes sense, not to mention they have been at the top of the rankings now for months.

A challenge is laid out to Darby Allin by Brody King, a coffin match, it is something we saw earlier this year with Darby and Andrade. This should mark the end of the feud and after the House of Black may move on to Miro after last week, Miro showed up to confront them.

We move to Thunder Rosa defending the Women’s Championship against the woman she lost too on dark a few weeks ago, Miyu Yamashita. It was a good match, with Rosa retaining.

Thunder Rosa needs to be in something substantial going into All Out though, she has had some great matches like the one we just seen, with Yamashita, Serena Deeb at Double or Nothing and Toni Storm at Forbidden Door. Now it looks like Britt Baker will be inserted back into the title picture, which is fine, but maybe get Toni Storm involved again, give Jamie Hayter another chance to shine. I think a 4 way match may be a very good option at All Out.

Then you can play off the relationship surrounding all four women, build off some animosity we saw months ago from Baker and Hayter. It is just something I would like to see as I feel the women’s division could be even better than it is right now in terms of story.

The main event, Bryan Danielson against Daniel Garcia was both great, and scary for a small period of time. With Bryan being the great seller he is, he made you believe his concussion issues came back in this match, especially after Garcia hit a DDT on the exposed concrete. Bryan bled from that. I found it interesting how the show started with a Blackpool Combat Club member bleeding, then ends with another member doing the same.

In a slight surprise, Garcia beat Bryan, but beat him after Bryan passed out via the sharpshooter. But thinking about it, Garcia just lost to Wheeler Yuta, so you could make the arguement for Garcia to win, so he looked very good. I think Garcia is someone to look out for, having improved so much since joining the JAS.

All in all it was a great episode of dynamite with a slow build towards All Out as we are just over month away from the pay-per-view. Next week the Undisputed Elite will be on the show, Thunder Rosa and Toni Storm will team against Britt Baker and Jamie Hayter. Jon Moxley will defend the AEW championship against Chris Jericho in two weeks time. More will be announced on Rampage this week.

In the lead up to All Out I’m excited for it, the build is looking good and based off the track record for AEW pay-per-views, it will be a must watch show.