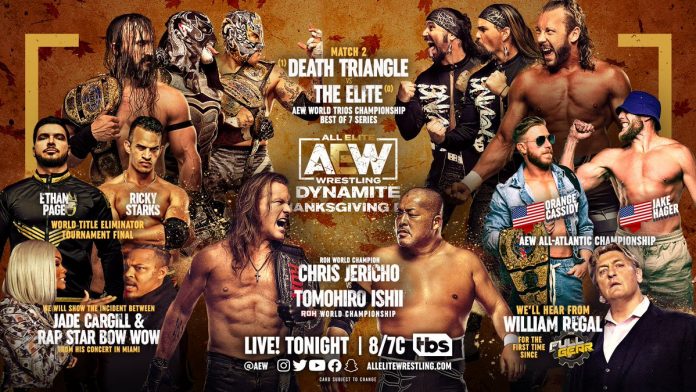 It’s Wednesday, and you know what that means …

All Elite Wrestling returns from the Wintrust Arena in Chicago, Illinois this evening for this week’s episode of AEW Dynamite.

On tap for tonight’s post-Full Gear 2022 edition of the weekly two-hour AEW on TBS program is Chris Jericho vs. Tomohiro Ishii for the ROH title, as well as Ethan Page vs. Ricky Starks in the AEW title eliminator tournament.

Also scheduled for tonight is Orange Cassidy vs. Jake Hager for the AEW All-Atlantic title, Death Triangle vs. The Elite in the best of seven series, William Regal will speak and we will see footage of Jade Cargill confronting Bow Wow in Miami, FL.

Featured below are complete AEW Dynamite results from Wednesday, November 23, 2022. The following report was written by Matt Boone (@MattBoone0709) as the show aired live on TBS.

The post-Full Gear 2022 episode of Dynamite kicks off with the usual theme song and video. We then shoot inside the Wintrust Arena in Chicago where pyro explodes and the commentators welcome us to the show.

No MJF This Week?

We shoot inside the ring where William Regal is standing by. He says fans won’t hear from the new AEW Champion until next week.

He says he sent MJF an email but we won’t hear about that until next week. He says that’s when MJF will be back. As soon as he finishes saying that, “Wild Thing” hits and out comes Jon Moxley.

As Mox nears the ring, Bryan Danielson sprints down and gets in between he and Regal. He pleads with Mox not to hurt Regal, pointing out he has a bad neck and bleeding of the brain. He smacks Mox and then pleads some more with him to ignore the boos and the crowd and just listen.

Danielson talks about his dads struggling in the past and tries relating it to their current situation with Regal. Mox gets in Regal’s face and says he wants only one thing from him. He tells him to run. Regal walks off as fans taunt him.

We shoot backstage where Renee Paquette is with Keith Lee. She says we all saw what happened between he and Shane Strickland at Full Gear. She asks for his thoughts. He walks in and Lee warns him to choose his words carefully. Strickland covers the camera and says let’s talk.

We head back to the ring for our first match of the evening, which will be a championship contest. Out comes Jake Hager from the J.A.S. He settles in the ring and his music dies down.

Now the reigning, defending AEW All Atlantic Champion Orange Cassidy makes his way out for his fifth defense of the title. The bell sounds and we’re off-and-running with this one.

The two go nose to nose and Cassidy does his hands in the pocket, wimpy kicks routine. He tries to take Hager’s hat but Hager isn’t having it. Finally he knocks it off Hager’s head and after picking it up, everyone from the J.A.S. in Hager’s corner tries getting it, but Cassidy avoids them all.

He dives onto Hager on the floor, but Hager catches him and slams him into the steel ring post. On that note, we head to a mid-match commercial break as the match continues.

As we return from the break we see Hager is still in control of the offense. He dominates for a while but then gets hit with a big spot. Moments later, Cassidy gets a roll-up out of nowhere and gets the three-count to retain.

The House Of Black Returns

Once the match wraps up, we see The Factory and QT Marshall come out and approach Orange Cassidy about giving out AEW All-Atlantic title shots, As they reach the ring, the lights go out.

When they come back on, Malakai Black and The House of Black are back and causing chaos by taking out Cassidy and The Best Friends. They take out everyone in sight, including security and then the lights go out again and we go to another commercial break.

We return from the break and out comes Ethan Page and Stokely Hathaway. They cut a heel promo on the way to the ring and then settle inside. Ricky Starks’ theme hits and out he comes.

The bell sounds and we’re off-and-running with this tourney bout. We see Starks is still heavily taped up following his attack and match with Lance Archer.

Page dominates throughout the majority of the match by focusing on the softened up ribs and mid-section of “Absolute.” Starks hits a big spear but hurts himself in the process.

As the action spills out to the floor and Page takes over control of the offense once again, we head to a mid-match commercial break. We return from the break and see Stokely Hathaway getting involved, The referee ejects him from ringside.

The action resumes inside the ring where we see Starks hit a big superplex off the top-rope. He ends up hitting back-to-back spears after countering out of the Ego’s Edge. He picks up the win to advance.

We shoot to video footage of Jade Cargill and Bow Wow’s confrontation in Miami and then we shoot to Renee Paquette who is standing by with her and The Baddies. Cargill has no comment but hypes next week’s Baddies Celebration.

Best Of 7 Series #2
The Elite vs. Death Triangle

We head back inside the arena where The Elite make their grand entrance. Kenny Omega and The Young Bucks settle inside the ring and their music dies down.

Now the theme for Death Triangle plays and out comes PAC and The Lucha Bros. Omega and Fenix kick things off for their respective teams as the bell sounds to get this one off and running.

Don Callis joins the gang on commentary as this match gets underway. Omega lays out Fenix and then others get involved. Omega hits a big spot but then turns around into one from Fenix,. Fenix hits a tornado spin out to the pile of bodies on the floor for a huge pop.

We return from a mid-match commercial break to see PAC have his mask torn off his face by The Elite. They hit the BTE Trigger on the exposed broken nose of “The Bastard” but Penta breaks up the follow-up pin attempt.

Jamie Hayter is the AEW Women’s Champion. Renee Paquette confirms that Thunder Rosa has relinquished the title due to uncertainty when she will return. Hayter is brought out and informed that she is not an interim champion but instead the actual undisputed women’s champion.

We return inside the arena where all three teams make their way to the ring. The action is off and running and we see the duo of Baker and Hayter jump off to an early offensive lead.

As Skye Blue and Willow start to shift the offense into their favor, we head to a mid-match commercial break as the match continues.

Now we’re back live and we see the duo is still in control of the action in the ring. Moments later, however, Baker and Hayter hit their finishers and Baker scores the pin fall to pick up the victory.

After a quick face to face verbal confrontation between Top Flight and FTR we return inside the arena where The Acclaimed make their way down to the ring. Max Caster does his usual freestyle rap and then they settle into the ring.

They continue their talking until finishing with their scissor me line. Then they are interrupted by Jeff Jarrett, Jay Lethal, Sonjay Dutt and Satnam Singh. They warn them to keep their names out of their mouths and raps.

The commentators run down action scheduled for next week and then we head to another commercial break ahead of our main event of the evening.

It’s time for the main event of the evening here on the Thanksgiving Eve edition of the show. We return to Tomohiro Ishii making his way to the ring.

Ishii settles inside and his music dies down. The familiar sounds of Chris Jericho’s tune plays and out he comes as fans sing along. He settles in the ring and his music cuts off.

The bell sounds and we’re off-and-running with our main event of the evening. We see the two close in on each other and trade slaps to the face to get this one underway.

After some back-and-forth action, we see Ishii take over as the commentators compare his offensive style to Taz. He ends up ripping Jericho’s chest open with chops, and Jericho’s chest bleeds for the rest of the match.

We see the action continue until eventually Jericho locks in his Walls of Jericho on Ishii. Ishii fights it for what seems like forever but eventually succumbs to the hold. Jericho retains with a win here by submission. Claudio Castagnoli ends up laying Jericho out to end the show.

🦃 #AEWDynamite Thanksgiving Eve kicks off in ONE HOUR LIVE on @TBSNetwork; don't miss it! pic.twitter.com/ryX9SolLAS