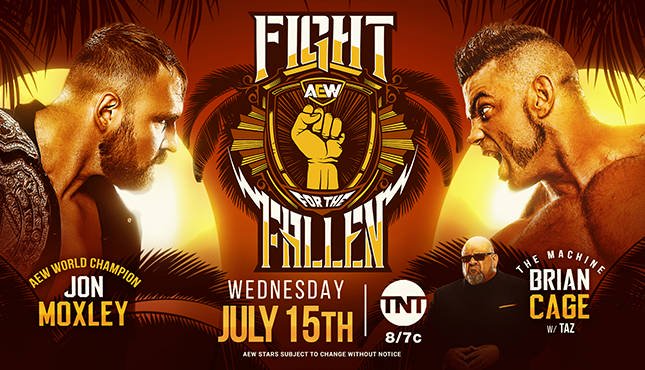 We’re once again at Dailey’s Place and Good Ol JR, Taz & Excalibur are on the call. Apparently Mr. Schiavone’s COVID-19 test is delayed. We wish him nothing but good health.

Kiss comes out with a big time dance routine with members of the Jaguar’s Cheerleading Squad. Pump kick by Cody he stomps Kiss in the corner and hits a slingshot suplex on the challenger. Kiss reverses a whip, Cody skins the cat and hits a disaster for 2. Arn is reading him the riot act abd Kiss nails the champion with a right hand that sends Cody over the top. Kiss stomps Cody on the apron. Enziguiri by the challenger. Kiss goes for the springboard elbow but Cody catches him in a full nelson. Kiss is fading but he rallies to break the hold. Kiss with a dropkick and a Spanish Fly. Cody misses a desperation armdrag and Kiss with a hurancanrana. Big kick by the challenger for 2.

Kiss misses a slpit legdrop and Cody with a boot to the head. He goes for the CrossRhodes but Kiss reverses it into one of his own for 2. 450 splash by Kiss for 2. Kiss catches a headscissors but Cody regains his balance and throws Kiss out of the ring. Alabama slam by Cody on the floor. He rolls Kiss into the ring for 2. JR, Excalibur and Taz (filling in for Tony) mention how desperate and off Cody seems. Vertebreaker by Cody for 2. He angrily covers him for another 2. Top rope superplex by the champion for 2. Cody is arguing with Aubrey Edwards and gets rolled up for 2. Kiss with a crossface but Cody reverses and Kiss gets the ropes.

Cody stomps his challenger and rains right fists. This is a very angry Cody. Cody rips the buckle padding off. Kiss rolls Cody into the unprotected buckle for 2. Toe to toe they trade forearms. Cody catches a clothesline and hits the CrossRhodes for the pin.

We get a handshake and an embrace of respect.

FTR vs. The Lucha Bros.

The Butcher & The Blade accompany The Lucha Bros to the ring, or at least drive up to the building in FTR’s truck. A little pushing and shoving before the bell. Pentagon and Hardwood lock up and Pentagon fires in the forearms, Chops by Harwood in the corner. Now we’re going back and for the with forearms. Superkick by Pentagon, tag in to Fenix. Lucha Bros get a 2 off of what looked like to powerbomb onto Harwood. Harwood blocks a suplex, bling tag by Wheeler. Springboard legdrop by Wheeler followed by an uppercut, Harwood tags in and hits a legdrop. Tag by FTR, they work Fenix on the top rope. Suplex by Wheeler, Fenix floats over and makes the tag. Running kick by Pentagon, Fenix takes Harwood out with a kick. Double superkick by the Lucha Bros, FTR to the floor as we go to commercial.

We are back and Wheeler nails Fenix with an uppercut as he came off the top rope. Harwood tags in and nails right hands and a suplex. Arm twist and a short clothesline by Harwood. Face first reverse powerbomb into the corner by Harwood for 2. Harwood gets sent to the outside, here comes Pentagon. Springboard legdrop after a launching splash by the Lucha Bros for 2. Fenix tags in and kicks Harwood off the apron. He tries a hurancanrana on Wheeler but Wheeler blocks it and tags in Harwood. FTR with a double team bulldog for 2. Pentagon tags in. Harwood stops him on the top rope, blind tag by Fenix. Harwood hits the superplex but Pentagon gets his feet up for the splash by Wheeler. Fenix goes for a splash but Harwood gets HIS feet up. The 2 teams get up at the same time and just start brawling. Fenic and Harwood go over the top. Pentagon goes for a piledrver on the apron, Wheeler blocks it. They trade suplex attempts. Tope DDT by Wheeler, Fenix dives on to Wheeler on the outside.

Inside the ring, Harwood with a punch to Fenix, Fenix bounds off the ropes with a hook kick, he tries it again but Harwood pulls off the mask and hits a small package for the pin.

Butcher and Blade slowly make their way to the ring but the Young Bucks nail a pair of superkicks and steal the key to the truck back from Butcher and Blade. Kenny Omega comes out with a cooler. Omega toasts a beer and FTR dumps their brew on Omega. Bucks hold Omega back as FTR leaves the ring.

Le Champion makes his way to the ring with Hager, Santana and Ortiz. We’re told he will join commentary as Taz needs to prepare Brian Cage for later tonight. We get a lesson in the 18-49 demo. Jericho declares himself the DemoGod. He sais the Orange Cassidy, the network and the advertisers in the important demo want a rematch. He admits that Cassidy was good, but no good enough enough. NO REMATCH. The DemoGod is not scared. He tells Cassidy to enjoy his night of main eventing. Orange Cassidy comes out through the crowd. Jericho calls him an entitled sloth and that there will never be a rematch. He tells him to shove his sunglasses somewhere. Thumbs down from Cassidy as Orange juice rains from the sky, ruining Jericho’s $7000 jacket.

Alex Marvez is with Jurassic Express for some pre match comments.

Not even going to try. Bullet points.

· Hangman Page is drinking in the back

· Stunt and Omega square off, Omega shoves Stunt down off of a lockup. Stunt takes a huge chop

· Armdrag rollup for 2 by Stunt

· Luchasaurus tags in as does Matt Jackson square off, spinning kick for 2 by Luchasaurus

· Stunt with a tope hurancanraba onto Matt Jackson

· Stunt and Nick go at it on the top rope. Jungle Boy with a hurancanrana and Stunt with a 450 for 2

· V Trigger by Omega on Luchasahurus and Stunt.

· Another V Trigger by Omega on Stunt and he gets the pin.

Alex Marvez with Hikaru Shida, who says she’s ready for anyone.

Chirs Jericho is not happy about having been doused in Orange juice.

The Nighmare Siters go to work. Allie with a kneelift on Paige and Brandi with a superkick. Jenkins tags in and gets about 3-4 seconds of offense before Allie hits a CrossRhodes on her for the pin to make the Nightmare Sisters 4-0 in AEW.

Dasha Gonzalez brings out Nyla Rose, who has another announcement. Hopefully it’s not an announcement to announce her next announcement. The announcement in the introduction of her new manager “Cougar” Vickie Guerrero. Vickie puts the women’s locker room on notice. Nyla Rose will steal every opportunity every one has ever dreamed of. Her theme musis is literally “Excuse Me!” remixed.

Taz lays down the law that Brian Cage has wrestled a regular schedule while Moxley has playing nursemaid. Taz wants Moxley to bring that pretty belt out and get ready for the beating to come. Cage swings and misses and Moxley goes to work. Cage with a big clothesline out of the corner followed by shoulder blocks in the corner. Forearm strikes and a clothesline. Fallaway slam by Cage. Running uppercut by Cage, Moxley with back elbows to counter. Moxley stretches Cage’s left arm on the bottom rope. Arm twists by Moxley and tries a cross armbreaker. Cage with strikes and a back suplex. Moxley drags the left arm over the top rope and hits a tope suicida. He goes for a wrist lock and cage throws him into the barricade. Cage with chops on the outsode. Moxley gets a hold of the arm again and wrenches it on a rail. Moxley introduces another barricade but gets belly to back suplexed as we go to commercial.

Back to the action, Moxley has a sleeper. Cage piggybacks him into the corner hard, forcing Moxley to break. Belly to back by Cage. Rear chinlock by the Machine, he drives his feet into Moxley’s back and holds a torture rack and drops the champion down for 2. Camel clutch by Cage, Moxley punches out but a back elbow sends Moxley to the outside. Moxley gets suplexed through a chair on the outside that jad been set up earlier. Taz checks on cage. Small package by Moxley for 2. Moxley with elbows but a powerslam by Cage. Cage misses a moonsault. Moxley with running knee strikes and a clothesline. Jumpimng knee by Cage. Paradigm Shift by Moxley for 2. Moxley with a forearm in the corner. Superplex by Moxley for 2 and Moxley goes straight to a kimura. Cage to his feet and hits a buckle bomb. Cage suplexes the champion while standing on the 2nd rope. Moxley tries the crossarmbreaker and tries to kick Cage’s face. Cage to his feet but Moxley brings him down again in the armbreaker. Taz with some choice words as Moxley tries to mock him. Unable to break the hold, Taz throws in the towel, surrendering in behalf of Cage.

Cage immediately goes on the attack and the lights go out. When they come on Darby Allin leaps off the top rope and nails Cage with the skateboard. Moxley celebrates as we go off the air.