It’s Friday Night, and you know what that means!

All Elite Wrestling returns from the DCU Center in Worcester, Massachusetts for the annual Fight For The Fallen edition of AEW Rampage tonight on TNT.

Featured below are complete AEW Rampage: Fight For The Fallen results from Friday, July 29, 2022. The following report was written by PWMania.com reporter Matt Boone (@MattBoone0709) as the show aired live on TNT from 10-11pm on 7/29/2022.

We see the usual opening video as the “This is Rampage, baby!” theme song plays and then we shoot inside the DCU Center for this week’s special Fight For The Fallen edition of AEW Rampage on TNT.

The commentary trio of Jim Ross, Excalibur and Chris Jericho welcome us to the show and then we head down to the ring for our opening contest.

With that said, out comes Jay Lethal, Sonjay Dutt and Satnam Singh for an AEW Trios match that will kick off in-ring action on the annual AEW Fight For The Fallen special event.

Orange Cassidy’s new theme song plays and “Good Ole’ J.R.” gets a little boost of enthusiasm as “The Freshly Squeezed” one emerges and makes his way down to the ring with Chuck Taylor and Trent Baretta of The Best Friends.

All six men have made their way to the ring. The bell sounds. It’s time for our first of four advertised matches here on tonight’s show to get off-and-running.

After some good back-and-forth offense in the early goings, we see The Best Friends and Orange Cassidy start to pull ahead into the offensive driver’s seats.

The trio enjoys some success for a couple of minutes until the massive Satnam Singh tags in for his team. The big man manhandles all three members of the opposing team with relative ease.

As he tags back out and the three-heel team settles into the offensive lead, we head to a mid-match commercial break as the action continues.

We return from the break and we see the heels are still in control of things. However, this doesn’t last much longer, as the babyface trio start to fight into competitive form from underneath before ultimately clutching victory from the jaws of defeat.

As soon as the three count is recognized and the bell sounds, we see the heel trio immediately begin a post-match beat down of the winning team. This lasts until we see Wardlow emerge from the back.

The reigning TNT Champion heads down to the ring and chases off Lethal, Dutt and Singh, effectively making the save for the “Freshly Squeezed” one and his buddies. That’s how this week’s opener wraps up.

It’s time to head right back to the ring for our second of four matches scheduled for tonight’s show, as the ring announcer begins his formal ring introductions for the competitors involved in our second bout of tonight’s show.

The commentary trio mention how this next bout is a rematch of a showdown that took place on a recent edition of the weekly digital series, AEW Dark: Elevation.

With that said, out comes “All Ego” Ethan Page ready for singles action. Already in the ring is his opponent for this match, Leon Ruffin.

The bell sounds and we’re off-and-running with this one here inside the DCU Center in Worcester, Mass.

We see Page start off in the offensive driver’s seat almost straight out of the gate.

Ruffin is moderately competitive in the early goings, however literally a minute or so later we see Page hit his finisher for the pin fall victory.

Quick an easy squash match-level victory for The Men of the Year member here on the Fight For The Fallen special edition of AEW Rampage on TNT this evening.

It’s time to head right back to the ring for our second of four matches scheduled for tonight’s show, as the ring announcer begins his formal ring introductions for the competitors involved in our second bout of tonight’s show.

This one-on-one showdown was announced on last week’s AEW on TV program after Lee Moriarty defeated Dante Martin and showed more viciousness than sportsmanship, which got under the skin of his friend/mentor turned rival Matt Sydal.

Each man makes their respective entrance to the squared circle for this, the third of four bouts scheduled for tonight’s show. Once again like last week, we see Stokely Hathaway coming out to get a closer look at Moriarty, as he continues to scout the promising young talent.

The bell sounds and we’re officially off-and-running with Moriarty vs. Sydal here on the Fight For The Fallen special edition of AEW Rampage on TNT from the DCU Center in Worcester, Mass.

Moriarty and Sydal shake hands, however before Sydal lets go, Moriarty delivers a head butt. He delivers a Front Chancery, but Sydal fires back with a knee strike. Sydal hits a kick to Moriarty’s face, followed by a low drop kick.

He delivers a standing moonsault, then goes for a pin but Moriarty kicks out. Moriarty slides to the outside, but Sydal delivers a baseball drop kick, followed by a moon sault off the top rope. Moriarty comes back and sends Sydal into the barricade back first.

Now we see Lee Moriarty hit a knee to Sydal’s head, but Sydal fires back with a Question Mark kick. Sydal hits the Lightning Spiral, then goes for a pin but Moriarty kicks out. Stokley Hathaway comes to ringside and watches on.

This leads to the finish of what has been an excellent contest here on Rampage, as Hathaway interferes on behalf of Moriarty, which allows Moriarty to hit a DDT.

From there, he goes for a pin but Moriarty kicks out. Moriarty locks in the Border City Stretch on Sydal moments later and Sydal taps out. Moriarty with another impressive win as he continues his ascension up the rankings in All Elite Wrestling.

After we head to another commercial break, we return inside the DCU Center in Worcester, Mass. here on TNT for more action here on this week’s edition of AEW Rampage.

We head back to the ring, however this time for a promo segment. With that said, out comes the brand new ROH World Champion — Claudio Castagnoli.

The former WWE Superstar known as Cesaro heads down to the ring. He steps inside the squared circle with his new ROH Championship title belt and joins Tony Schiavone, who along with Blackpool Combat Club leader William Regal, who is also in the ring, will be speaking with him now in our next segment of the show.

Castanogli appreciates the love and support from the fans as he feels it’s a great honor to stand before everyone a champion. He claims it’s just the beginning as he welcomes the ROH Pure Champion Wheeler Yuta. The Blackpool Combat Club emerges with his ROH Pure Championship title belt to a nice pop from the fans in Worcester.

Before he can say or do much of anything, Chris Jericho hops up from his seat at the commentary desk and grabs a microphone. He screams, “Enough already!”

The J.A.S. leader and proud sports entertainer mentions how he doesn’t want to hear the chants for these guys. He explains that instead of chanting “You deserve it!” like the AEW fans are doing for Castagnoli finally holding a world championship, he feels it would be more appropriate for Castagnoli to get his boot up his ass.

Wheeler tells him to shut up as he beat Jericho’s boy, Daniel Garcia to retain his championship. Wheeler is feeling so confident that he’s pretty sure he can beat Jericho as well! Jericho chuckles at the idea as Wheeler gets a vote of confidence from Claudio and Regal.

Jericho accepts the challenge and it looks like it will be going down on next Wednesday’s edition of AEW Dynamite on TBS. We learn that the match will have high stakes, too.

Wheeler tells him, “No thanks,” at first, but ultimately Jericho convinces him to accept the bout when he offers to put his Interim AEW Championship shot against Jon Moxley at AEW Quake by the Lake on-the-line.

It’s later made official that the winner of the Jericho-Yuta bout on next Wednesday’s installment of the weekly two-hour AEW on TBS television program will move in to challenge Mox for the interim strap at the AEW Quake by the Lake special event.

It’s main event time, folks! And this week, the headline billing honors go to a pair of familiar faces to fans of the women’s division in AEW.

Before the match, however, we shoot behind-the-scenes where Mark Henry is standing by with Anna Jay and Ruby Soho appearing via split-screen for the weekly pre-main event interview hosted by the WWE Hall of Fame legend.

The two each speak briefly and then “The World’s Strongest Man” wraps up the segment with his usual, “It’s been enough talk, it’s time for the main event of the evening!”

With that said, we head back inside the DCU Center in Worcester, Mass. where Ruby Soho and Anna Jay each make their respective walks to the ring for our final bout of the evening here at the AEW Rampage: Fight For The Fallen special event. The bell sounds and we’re off-and-running with this one.

Soho and Jay lock-up to get the action underway and the crowd makes some noise as these two start to get after it. After some early back-and-forth action with each lady spending a few moments in the offensive driver’s seat, we head to a mid-match commercial break as our headline bout of the 2022 installment of Rampage: Fight For The Fallen continues.

We’re back from the break and now we see Soho looking for her No Future kick but Anna had it scouted and tried dropping an elbow. Anna misses as Ruby gets her in a rollup for a near fall. Ruby with a knee to the face of Anna, Ruby charges as Anna moves out the way, Ruby with a back strike to Anna from the corner. Anna kicks the injured hand of Ruby as Ruby fumbles in the corner. Anna lands a nice side-kick to Soho.

The pace and intensity starts to pick up a bit now, as Soho and Jay both appear to see and feel the end of this one coming soon. Anna takes the cast off of Ruby. Referee Aubrey Edwards quickly grabs it and tosses it out the ring so it isn’t used as a foreign object by either competitor in an attempt to gain an unfair advantage.

We see Soho deliver some vicious elbow strikes to Jay. She tries to lift Anna, however the new addition to the Jericho Appreciation Society alongside Tay Conti, Sammy Guevara and the rest of the gang of sports entertainers avoids it and actually starts to take over.

She ends up blasting Soho with a big thrust kick. Ruby comes right back with a suplex and now both women are struggling to come to their feet. It isn’t much later when we see Jay finally wrap this one up with a somewhat unexpected victory. 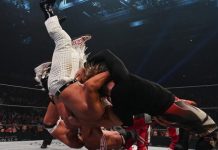 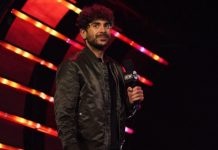 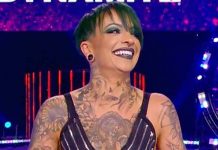