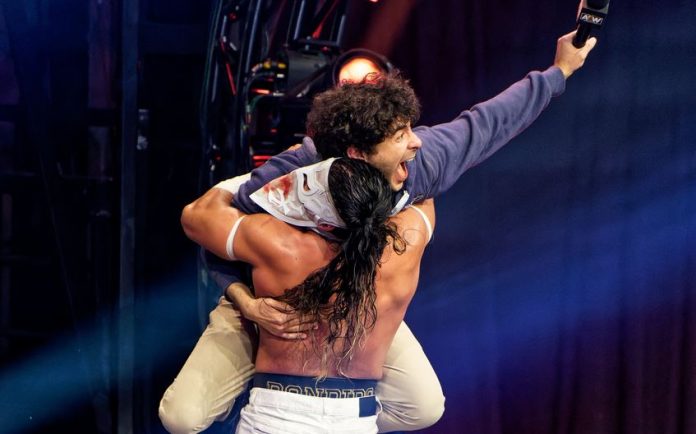 ROH World Champion Chris Jericho retained his title over Bandido in this week’s AEW Dynamite main event from Philadelphia. Bandido made his AEW debut with this.

While there is no proof that Bandido has signed with AEW, the Wrestling Observer Newsletter reports that he has been offered a full-time contract with the company.

Bandido was reportedly approached with the offer shortly after his loss to Jericho on Wednesday night.

For those who missed it, below is some post-Dynamite footage of AEW President Tony Khan and Bandido hugging on stage. Before the Rampage tapings began, Khan appeared on stage with Bandido and boasted about how awesome he is.

Bandido has recently worked for a number of promotions, including AAA, GCW, and MLW. On August 12, he made his Impact Wrestling debut, defeating Rey Horus. The following night, Bandido worked the Six-Way Elimination Match, in which Eddie Edwards defeated Bandido, Moose, Rich Swann, Sami Callihan, and Steve Maclin to receive a title chance from Impact World Champion Josh Alexander at Bound For Glory. Bandido surrendered the PWG World Title to reigning ROH Pure Champion Daniel Garcia at Delivering The Goods on May 1, ending his record-breaking PWG World Title run at 863 days. He only held the championship three times because PWG canceled 2020 due to the COVID-19 pandemic.

Here are some Bandido and Khan post-Dynamite clips:

Tony Khan and Bandido after Dynamite went off air pic.twitter.com/2jjZAkIbYy