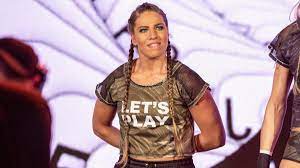 `”The Problem” Marina Shafir has apparently signed with AEW.

It was announced today that Shafir’s first-ever AEW t-shirt is now available on the ShopAEW website. Pro Wrestling Tees first tweeted out the t-shirt yesterday. You can see Shafir’s first AEW merchandise in the tweet below.

While AEW has not announced Shafir’s signing as of this writing, the new merchandise indicates that she is under contract. It should be noted that Shafir’s signing has not been confirmed yet.

We noted before how Shafir took to Twitter back on December 15 to thank AEW President, CEO, General Manager & Head Of Creative Tony Khan, the day after making her debut with a loss to Kris Statlander on AEW Dark. Since then she defeated Valentina Rossi on the January 4 edition of AEW Dark, and then faced Reka Tehaka at the January 15 Dark taping.

Shafir, who is married to WWE NXT Superstar Roderick Strong, was released from WWE back on June 25, along with other budget cuts. The former MMA fighter returned to the squared circle back on October 22, defeating Masha Slamovich at GCW’s Josh Barnett’s Bloodsport 7 event.