– AEW star Joey Janela has filed a trademark for his “Bad Boy” nickname. WWE has recently been referring to Rusev as “the Bad Boy” and Janela noted the following:

You gotta do what, you gotta do 🤷🏻‍♂️ Sorry @RusevBUL https://t.co/HZ61uEa4Hv

EXCLUSIVE: "'Bad Boy Rusev?' Is that what we're supposed to call him?!" @LanaWWE #WWEStarrcade pic.twitter.com/q1a0pLgBco

– Sammy Guevara has responded to criticism over his shooting star press attempt during this week’s edition of AEW Dyanmite:

But keep spreading your #fakenews pic.twitter.com/JLilDlVgBf 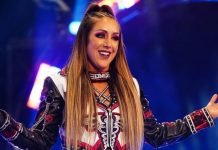 Britt Baker Reveals What Would Make Her Choose Between Dentist, Wrestling Careers