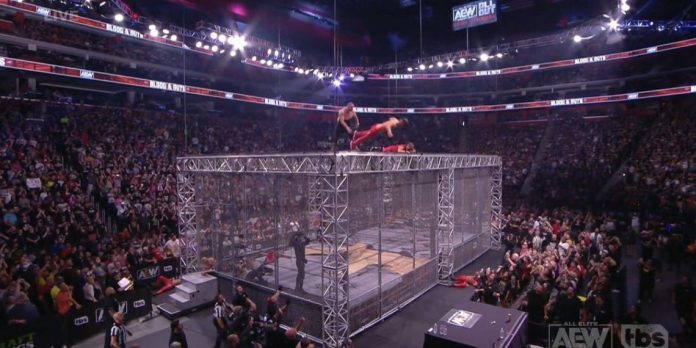 During the main event of Wednesday night’s Blood & Guts episode of AEW Dynamite on TBS, Santana appeared to suffer a knee injury.

While delivering a Uranage to Daniel Garcia, Santana’s left leg gave way, resulting in the injury. He landed, his leg positioned awkwardly, and it dropped to the ground.

After being examined by ringside officials, Santana spent the remaining time talking to the referees near the double cage. Near the end of the match, he was assisted to the back and taken away. Santana left the match and never came back. You can see clips of the injury below.

Garcia, Chris Jericho, Jake Hager, Sammy Guevara, Angelo Parker, and Matt Menard were defeated by Santana, Claudio Castagnoli, Interim AEW World Champion Jon Moxley, Eddie Kingston, Ortiz, and ROH Pure Champion Wheeler Yuta in the Blood & Guts main event. On top of the cage, Castagnoli forced Menard to submit to the Sharpshooter, while Kingston had Jericho do the same next to him. After the bout, tension between Kingston and Castagnoli continued, but the event concluded with the winners celebrating together on top of the cage, minus Santana.

As of this writing, neither Santana nor AEW have made any comments regarding the injury, but we will keep you informed. Stay tuned to PWMania.com for more.