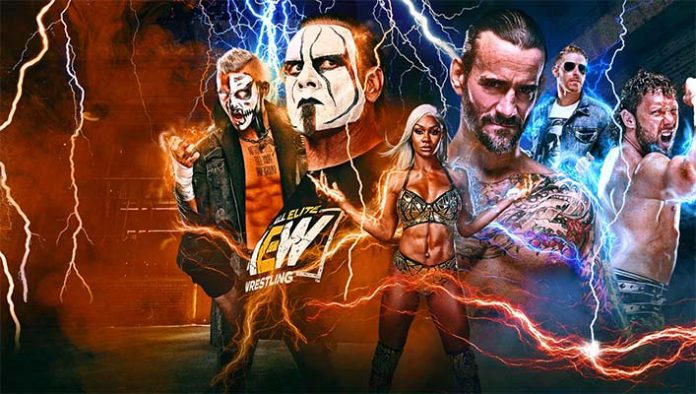 Just over 3 years ago the professional wrestling world changed forever…again. There hadn’t been a momentum shift of that magnitude since the Monday Night Wars of the late 1990’s between WWE and WCW, and there will likely not be something that special again, at least not in our lifetime.

The creation of All Elite Wrestling was announced in January of 2019, and in May of that same year they held their first PPV titled Double or Nothing. This was then followed by a weekly (and live!) domestic television world premiere on the TNT Network just 5 months later. Expectations were high but cautious, mixed with some trepidation at anyone who might fully challenge that mainstay “sports entertainment” behemoth out of Stamford, CT.

But since that time, what we, as professional wrestling fans, have been given as a gift on a weekly basis is nothing short of fantastic and extraordinary. And that gift is All Elite Wrestling.

And its now high time everyone gets on board – even the WWE diehards and all the AEW haters.

This is an AEW piece, make no mistake about it.

Welcome to my nook of the PWMania web, my name is JD and let’s take this pro wrestling ride together! I’ve been a fan since the territory days, where every few months as a 11 or 12 year old kid I got see a touring and now legendary organization called NWA come thru nearby Charleston, WV with a cast of characters that included the likes of Ric Flair, Dusty Rhodes, The Road Warriors, The Rock n Roll Express, and so many others. I became a fan immediately, and as such you could always find me parked in front of my TV at 6:05EST watching TBS every Saturday night, as professional wrestling became my obsession.

And how I craved it….for years. That is until I found girls, and then fatherhood. And until recent years, I have been gone a while.

Fast forward some 25+ years and All Elite Wrestling has made me crave professional wrestling again. For years I strayed, turning away from the WWE product, not-so-much due to lack of interest, but because life and family had taken over (but yes also because WWE was often stale, predictable, and just not very good or consistent).

But when AEW came onto the scene, I was immediately intrigued in wrestling again – Chris Jericho is on-board from day one? Color me interested because that man is a celebrated professional wrestling genius and the godfather of successful character reinvention, year after year. He made his SUCCESSFUL mark on nearly 4 separate decades of this business we love, from Mexico to New Japan, to WCW, to the WWE, and now AEW. If he’s all-in on AEW, then I’m definitely interested.

Now we are three years into this experiment and AEW owner/CEO Tony Khan has found a way to make professional wrestling fun, engaging, and must-see again. And he’s doing it on a weekly basis…and twice a week at that.

AEW has not only lined up some of the biggest names in professional wrestling history, but they have also managed to bring in truly independent talent, grow them, and make them household names – performers like current AEW World Heavyweight Champion Hangman Adam Page, Orange Cassidy, MJF, Darby Allin, current AEW World Tag Team Champions Jurassic Express, Britt Baker (D…M…D!), and the great Thunder Rosa who is also your current AEW Women’s World Champion.

3 years ago I didn’t know a single name on this list that I just wrote down for you – and now every week they are all MUST SEE professional wrestling television for me.

And fun fact: every current champion in AEW is an AEW, home-grown talent.

Couple all of that with the continued influx of veteran, and yes oftentimes former WWE, talent – legends like Jericho, Danielson, Omega, Moxley, Sting, The Hardys, Jim Ross, Tony Schiavone, and so many more into the company – and what you have is a professional wrestling organization for old and new fans alike.

And not to mention AEW also managed to orchestrate the single greatest return to the business of all-time with CM Punk.

I understand many of you will disagree…and so I ask you: are you truly watching this company each week, or are you hating on it for the sake of hating and being super-cool and trendy?

The time to get on board with AEW is now. If you weren’t sold early on by Jericho, Cody Rhodes, Kenny Omega, and The Young Bucks starting their own promotion AND bringing (out of retirement!) the greatest pro wrestling voice of all-time Jim Ross with them, then get sold now on the weekly shows that continue to give us all PPV quality matches and storytelling for free on weekly television, mixing new talent with older legends on must-see shows, especially AEW Dynamite.

I cannot overstate how much you’re missing if you are not watching:

– they are breathing new life into our revered pro wrestling old guard, like Bryan Danielson, Jon Moxley, (including newcomer Wheeler Yuta) all being managed by William Regal in a new faction called the Blackpool Combat Club (little secret….they are out to hurt people). They have the icon Sting teaming with and growing the character of Darby Allin. Also AEW is now home to The Hardy Boyz (now called The Hardyz), returning to professional wrestling and having a final run as one of the best tag teams to ever work in the business.

– bringing legitimate fun back to weekly pro wrestling TV in the form of talents like DanHausen, Jurassic Express, The Young Bucks, Dante Martin, Ricky Starks, and The Lucha Brothers.

– and watching CM Punk have an absolute Renaissance in the twilight of his career. He continues to perform at a high level and each week it’s obvious his goal is to outperform his previous performance, whether on the mat or on the stick. He is one of the best ever, and he’s back on TV giving absolute performance clinics each week.

These are but a few of the dozens of available examples as to why AEW is currently the best wrestling promotion and product on television.

All this said – if you haven’t done so already, give AEW an honest try. I guarantee you will find someone or something to love about this still-in-its-infancy organization, and that ultimately you will not be disappointed.

AEW gives you countless hours of free programming each and every week, between 2 cable television shows and multiple streaming broadcasts on YouTube and other outlets. This is programming where you can find new talent mixing it up with the older legends of our childhoods, with complete and full storylines that are executed with a compelling delivery in the end.

With AEW…wins matter. Losses matter. Relationships matter. The story matters. And above all else, the talent is free to demonstrate their visions of who they should be, working free from the creative chains that confine most of the rest of the professional wrestling industry to repetitive, incomplete, and uncompelling finishes that result in a repetitive, predictable, and lackluster product.

The time for AEW has come and it is now, and I challenge you all to take a look and see for yourself what true dedication to the sport we love so much can be when everyone has a say in the success of their company. From the owner Tony Khan on down thru the staff helping behind the scenes, AEW thrives with fantastic performances grown from a shared desire for everyone to succeed, a goal shared by all involved.

And for these reasons and so many more, I’m ALL IN on AEW.