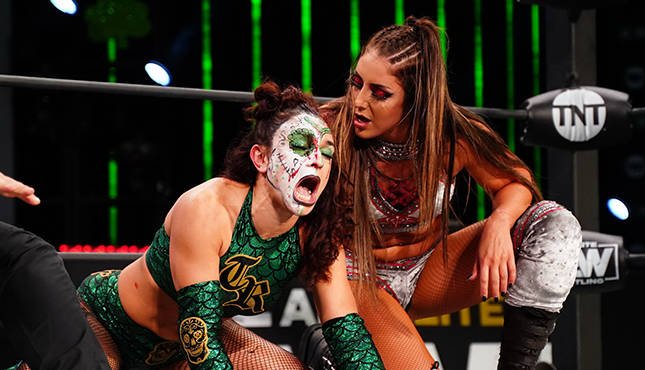 During the past few months, I’ve written about how professional wrestling is about the moments, and more specifically, how All Elite Wrestling has provided some of those moments, which have helped it plant a flag among the landscape of the history of the industry. Sting’s surprise debut, Kenta’s shocking attack, and other occasions from the All Elite group are moments that will be remembered, regardless of how successful AEW will be in the grand scheme of things.

This past week on Dynamite, not only did the promotion have another moment that will be etched into the history books, but the athletes involved had what could be a career-defining performance when fans reflect on the match in several years.

Britt Baker, the six-year pro, was one of the original women inked to a contract for the company after its launch in 2019, and in many ways, she’s grown as a performer on a national stage, which isn’t a bad thing. One of the main points that I made when the “Wednesday Night Wars” started was that one of the major draw backs of NXT is that polished performers that were already capable of big runs on main stream television for the company were often used in NXT for some of the prime years of their careers, which ultimately decreases their time on the main stage of WWE in front of the most viewers possible to become as big of a star as possible, which allows them to draw as much money as possible. As an example, in my opinion, Adam Cole has all the skills to be a main event star and a top draw for the promotion, but he’s working on the least-watched brand during the prime of his career.

On the flip side, All Elite takes a chance to allow performers to evolve under the bright lights of television, and there is a risk that it might expose their inexperience, but it also makes it possible for them to become even more polished than they would’ve been working for smaller crowds on the independent circuit. The environment of national television and the chance to work with the stellar veterans is a situation that could allow talents to flourish to their maximum potential. Most importantly, this scenario allows the company to maximize the exposure to the prime of a talent’s career on national television so that they can become a more established star instead of floundering those prime years on the independent scene.

For Baker, early in her tenure in AEW, some of the inexperience showed through, but that’s to be expected because working for television is completely different than a typical independent match. As unfortunate as the injuries were, they allowed her to find herself as a performer and she’s done very well in the heel role. Granted, is Britt Baker as polished as she should be or is going to be? No, but there’s absolutely nothing wrong with that because much of the investment that is made into characters from the audience is from the narrative of the journey.

Wednesday night, Britt and her opponent, Thunder Rosa took an important step in that journey.

Since she landed on the main pro wrestling radar, I’ve found Thunder Rosa to be a hidden gem in some ways because while I appreciate the passion and dedication of Billy Corgan to make the NWA relevant for the first time in years, as I wrote at the time, I just didn’t think the Youtube model could sustain a promotion, especially within the already crowded landscape of the industry. Truth be told, Rosa is a talent that has the skills to be on national television, and a smaller platform just doesn’t maximize her potential. She has the character, the presentation, and the in-ring ability to be a major star for AEW. There was much discussion in recent years about the Latino market and the ability for organizations to attempt to capitalize on the demographic. Along with the Lucha Brothers, Thunder Rosa is another great choice to market toward the Hispanic audience.

For the match itself, it will have its critics because women athletes and the blood isn’t usually seen, but as far as a performance, it summed up a star-making performance for both competitors. It’s something that can’t be measured or quantified, the organic emotion involved in that bout is why it will be remembered as a classic contest.

.@RealBrittBaker vs @thunderrosa Unsanctioned Lights Out Anything Goes Match, Historic First Time Ever Match on #AEWDynamite | 03/17/21https://t.co/DYqmnYhGCd via @YouTube pic.twitter.com/u1CntcWLWg


It appeared that Britt Baker received a hard way cut from the ladder and she was spilling blood on the canvas. Understandably, she looked a little stunned, but continued the bout, and the visual of the blood in her eyes as she looked up is her “Stone Cold moment” in many ways. Granted, she’s a heel, but the passion and determination it takes to continue a bout under those circumstances goes beyond the narrative of a professional wrestling show. There’s a level of real-life dedication that can be seen even through the heel persona as Baker and Rosa battled toward the conclusion of the match.

With blood in her eyes, @RealBrittBaker continues to push through in this LIGHTS OUT MATCH!


The emotion generated from this contest wasn’t because of the blood or the tacks themselves, but rather the determination that was showed to continue through it so the critics of the violence are misguided in some ways. Granted, AEW can’t have these types of matches on a regular basis or it wouldn’t have the same effect, but this spontaneous scenario was a major win for everyone involved.

For as much talk as there was in recent years about the tide shifting for women’s wrestling, and there certainly has been a much better presentation of the division, AEW gave Thunder Rosa and Britt Baker the platform to truly represent that women’s wrestling can absolutely be a the main event level. Britt and Rosa both deserve major credit for their accomplishments with the bout, Baker put herself on another level, and Rosa is solidified as a star.