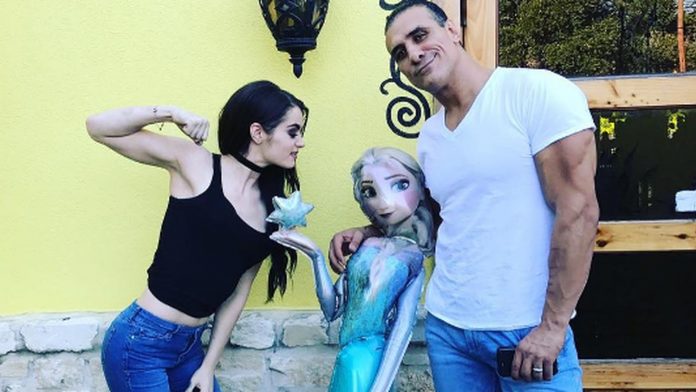 Split from Paige: “By now everyone knows we are not together. We decided to end our relationship because I am in San Antonio, she is in Orlando, and now she is back on the road, and you know the schedule on the road there is non-stop, and my schedule is also non-stop. My projects with Telemundo and TV Azteca, calendar, clothing line, charity events, and all that stuff, we just weren’t seeing each other. With her training to come back they were not allowing her to come to San Antonio I couldn’t go to Orlando because II have three little kids, and I was coming home 2-3 days. I had to choose between going to Orlando for that time or staying with my kids and of course I chose to stay with my kids, so we decided to end our relationship. I know people just found out or they are just finding out, and the ones are just finding out, it was days or few weeks ago. We ended the relationship weeks ago, but we both agreed not to say anything because we got tired of the media, people, everyone just having an opinion about us, including family who had an opinion on our relationship with what we did.”

Still being on good terms with her: “When we were in Canada doing Impact tapings, I talked to Paige that it is about time we both say something because, you know, people are starting to realize we are not together because I am always working and you are always hanging out with your friends. After her saying that she didn’t want to say anything and that we had come to an agreement regarding it, but she said that if you want to say something say something because I wanted to, so I said okay, I’m not really going to say anything. Apparently a friend accidentally posted a video stating that she was single, and then that video was deleted, but you know once you put something on the internet it is there forever. People started coming to me and thought to myself, seriously? I called Paige afterwards and asked what was going on? She said that it was an accident, it was my friend, but I said, yeah, it’s always your friends, your family, your brother, someone from your side, it’s just not fair. We came to an agreement, and even though it wasn’t you saying it, it was someone from your side and I am just tired of being affected by your side of people, or your people, but that is the reality of things. We ended up on good terms. I wanted what was best for her, she wanted what was best for me. I know she is going to be the most successful diva in history, and she has all the talents. All the talent; we had an amazing relationship, and I just wanted to say this, it wasn’t the haters that broke us up, we both just decided that it was best for our careers and our kids.”