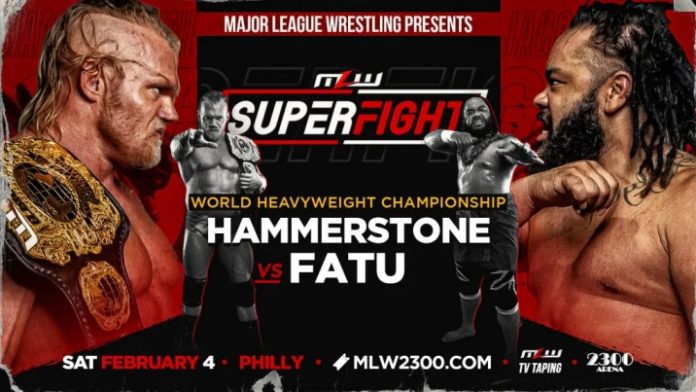 Major League Wrestling has announced its main event for its upcoming SuperFight show scheduled for February 4th in Philadelphia at the 2300 arena.

The current MLW World Champion Alex Hammerstone will defend his title against Jacob Fatu in the headlining match at SuperFight.

Hammerstone vs. Fatu to main event SuperFight in Philly https://t.co/bcCriWRwh7

Alex Hammerstone defeated Jacob Fatu on October 2, 2021 for the MLW World Championship. On February 4, Fatu has an opportunity to regain that title.

Here is the full press release from MLW:

Major League Wrestling today announced Alex Hammerstone vs. Jacob Fatu for the World Heavyweight Championship at MLW SuperFight’23 on Saturday, February 4 at the 2300 Arena in Philadelphia.

The biggest rivalry in MLW is finally getting the rematch to the biggest title fight in MLW history as Hammerstone vs. Fatu 2 is set to main event SuperFight’23, an event worthy of such a colossal championship clash.

Having won Battle RIOT IV in New York City last year, Fatu secured a title shot anytime, anywhere and with the date and location confirmed, Fatu and Hammerstone rumble for the biggest prize in the sport on the line.

Emerging as rivals during CONTRA Unit’s reign of terror in MLW, it would be the unlikely hero Hammerstone rising up from arrogant rulebreaking Dynasty founding member to the man leading MLW into war to finally topple the international cabal.

Winning Battle RIOT III and fast-tracking a monumental title versus title bout at FIGHTLAND’21, then-National Openweight Champion Hammerstone would endure a ferocious fight from Fatu only to roar back and defeat the “Samoan Smashing Machine” and take the belt.

Since then, Hammerstone has been riding a thunderbolt as World Heavyweight Champion, defeating a who’s who of challengers from Davey Richards to Richard Holliday as well as top ranked international threats.

Along the way Fatu has rampaged through MLW, crushing out CONTRA after a falling out and uniting his family and friends to form the popular Samoan SWAT Team. Stacking high-profile wins en route to winning Battle RIOT IV, the collision course is now set for the league’s two greatest to battle for a second time.

Will Fatu dethrone the mighty Hammerstone and take back the World Heavyweight Championship?

Will Hammerstone prove he is truly the greatest MLW World Heavyweight Champion the league’s 20-year history?