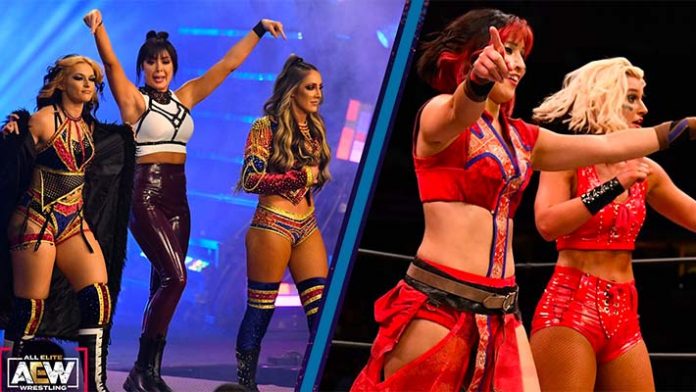 Given the proliferation of women’s tag matches lately on AEW television, one might ask if there’s some kind of reasoning behind that. Perhaps Tony Khan is thinking about introducing women’s tag titles at some point? If that’s true, then he needs to be very careful in implementing a plan like that.

There are two obvious obstacles to this. Perhaps the biggest one is that AEW has too many titles as it is. Including ROH, there’s a combined 12 titles. My solution to this problem would be to eliminate the ROH titles entirely and shift the brand over to YouTube, incorporating it as a developmental territory with the Dark shows. Warner Discovery is highly unlikely to give Khan a TV deal for ROH considering the tens of billions of dollars in debt they’re dealing with. It’s simply not nearly as important to them as Dynamite and Rampage, which they’re far more likely to spend money on than Ring of Honor. The simple truth is that the purchase of the company hasn’t resonated by drawing in more fans and providing more revenue. It’s a net negative by taking the focus off AEW’s own titles.

In addition to taking away the five ROH titles, the All-Atlantic belt should go as well. It’s mainly defended overseas and serves no real purpose. If it was actually being used on AEW television, I might have a different opinion. The trios title works since there are so many factions in the company. The TBS title could also go, but I’m reluctant to make that argument due to the women’s division being rather large, even if the number of true stars is somewhat limited. Taking my changes into account with the addition of women’s tag titles, it leaves AEW with a total of 7 belts. It’s on the upper level of what’s acceptable, but I think it works.

The other big issue with introducing women’s tag belts is the lack of development in the women’s division. Outside of Britt Baker, Toni Storm, Hikaru Shida, Serena Deeb, Ruby Soho, Athena, Jamie Hayter, Kris Statlander, Kiera Hogan, Madison Rayne, Thunder Rosa, and Nyla Rosa to some extent, the division doesn’t have a very deep core it can draw on for tag teams. That’s partly a combination of subpar booking and not enough TV time. Delegation by Tony Khan and a second hour of Rampage would solve both issues.

Khan has been featuring women’s tag teams more prominently in the last several weeks, which leads me to think he has designs on eventually introducing tag belts for them. He would be wise to develop it carefully and with good planning. Given the upheaval caused by the Punk/Elite situation, reforming the structure of his company to better control locker room disagreements and firm up storylines/TV time will create stability to keep the shows moving smoothly. Also, waiting for the TV contract negotiations to conclude at some point next year would be a smart strategy. Given the pressure from Triple H and WWE, having a renewed TV deal with good money would serve as a bulwark against Stamford and provide a good foundation for introducing women’s tag belts.