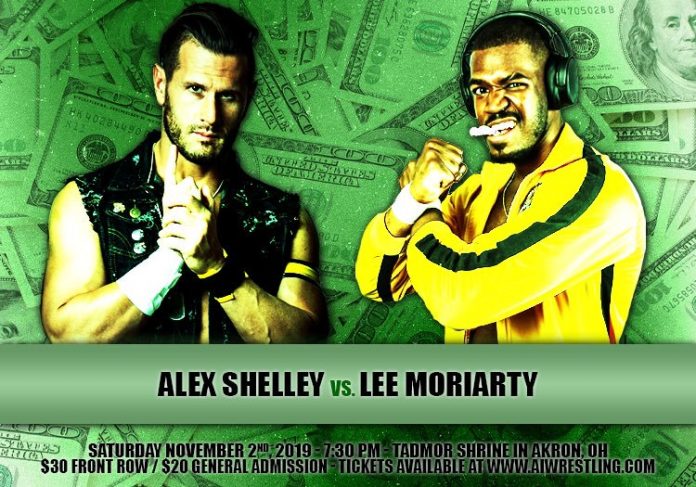 Early last year, I penned an article about a rising prospect in the Pittsburgh area, Lee Moriarty, a true student of the game that garnered praise for his potential almost immediately for his natural ability inside the ring ropes. Now a four-year pro, the young grappler that cites Bruce Lee as his inspiration, began to expand his wrestling turf in the past year and a half, working the independent scene in multiple states while still remaining a mainstay in the steel city through Ryse Wrestling, the promotion owned by his trainer, longtime and well-respected Pittsburgh wrestler, Brandon K.

A former rugby player in high school, Lee brings a humble approach and a drive to learn as much as he can about the squared circle so when a chance to learn from an international legend became a reality, he jumped at it. Last September, while scheduled for a loop in the United States, The legendary Ultimo Dragon was booked to appear for Absolute Intense Wrestling, an organization that garnered its reputation through a mixture of wild matches and nostalgia to present a truly unique product for its fans. AIW organizers secured the global star for a special training seminar, an opportunity that Moriarty eagerly pursed with a trip to Cleveland just a few hours from his hometown.

“I was able to convince Dragon to come in a day early and host a special seminar. At that seminar was the first time that I can remember meeting Lee as well as seeing him in a ring for the first time,” said John Thorne, AIW promoter.

The 25-year-old Moriarty still dedicates himself to a strict in-ring training regiment when he’s not performing at live events or incorporating new exercise routines to sharpen his skills. When he’s not learning on the mat or in the gym, Moriarty studies as much film from as many eras and styles of professional wrestling as possible, making full use of the increased availability to footage through modern technology.

“I’ve done a lot of seminars in my short time in wrestling and I’d easily put that one in my top five. Learning from a legitimate legend like Ultimo Dragon is a major highlight. Anyone who knows me, knows that my goal is to make it to Japan. I love the style and the way professional wrestling is portrayed in that country. Being able to learn first hand some of the differences in the American and Japanese approach to wrestling from someone like him was amazing,” Lee explained.

The innovator of the Asai moonsault watched as the athletes that attended the seminar completed a variety of in-ring routines, but a particular competitor caught his eye, prompting his recommendation to AIW management.

“At the seminar, Ultimo took me aside and told me he was most impressed with Lee out of the group that was there,” Thorne commented.

The praise from such a global star was more than enough approval for Thorne to find a spot on the AIW roster for Lee, who debuted for the mid-west group this past February and remained a regular throughout the year, including an appearance in the J-Lit tournament, one of the premiere events on the independent calendar held in honor of the late JT Lightning, who was instrumental in the foundation of the Ohio circuit. Moriarty considers his time a part of AIW events a very valuable and important aspect of his wrestling career.

“Knowing that a lot of contracts were going to be offered throughout 2019, we wanted to look and see what hungry young talents were out there. We have a school that is producing great talent. However, we realize we also need to think outside of the box and include talent from all over. Just like our Ultimo Dragon seminar, Lee had signed up for our new talent initiative as well, he impressed the coaches who were running the new talent camp and they all encouraged me to book Lee on the event later that night, which I did,” Throne remarked.


Ironically, as Lee Moriarty emerged onto the mid-west scene through AIW, one of the best wrestlers of the past 15 years saw the group as chance to re-emerge in the sport. Alex Shelley, the technical competitor that worked for Ring Of Honor, Total Nonstop Action, New Japan, and various other leagues, stepped among from the ring last year to finish his degree in physical therapy, a decision that allowed him to diversify his career options. When he decided to return to the ring, AIW was one of the places he wanted the ability to showcase his skills against some of the best young talent on the circuit.


“Honestly, I checked the DM’s on the AIW twitter and we had a message from Alex reaching out about coming back and working a few dates for AIW as he began his return to the pro wrestling world. Without hesitation I gave him all the dates we had on the schedule,” Thorne explained.

Stylistically, Moriarty and Shelley match-up well, which is why a bout between the two was announced for a very important platform in Absolute Intense Wrestling history, its 200th live event this Saturday at the Tadmor Shrine in Akron, Ohio. For the promotion that started in dingy night clubs and small venues in 2005, this weekend’s card is quite a milestone for the company that now has packed houses throughout Ohio and streams live broadcasts of many of its events. In true AIW fashion, Nick Gage is booked to wrestle on the same card that will feature an appearance from WWE Hall of Famer, Ted Dibiase Still, the Moriarty/Shelley bout remains one of the most anticipated contests for the show, both from fans and Lee himself, who was very surprised when he saw the announcement on social media.

“Man, I honestly thought they were messing with me when I was told that. Alex Shelley is a pioneer in professional wrestling. He’s one of the most creative and versatile wrestlers in the world. The fact that I was chosen to stand across the ring from him at AIWs 200th event is surreal,” he explained.

On a card that is stacked with talent like Matt Justice, Eddie Kingston, Erick Stevens, Tre Lamar, and several others, perhaps the match-up between the young lion and the polished pro will steal the show for those in attendance.

Lee has overachieved at ever chance I have given him and the hope is he will continue to do that, not only against Alex Shelley, but into 2020 as well, Thorne said.

So, a very intriguing story will unfold inside the ring ropes this weekend when one of the young athletes with the potential to become a major star in his own right squares off against one of the most accomplished veterans in the modern era. It’s very possible that in a few years, this bout against Shelley will be considered one of the defining moments of Moriarty’s career in the sport.

“The fans can expect to see me the most prepared and focused I’ve ever been in my life. While being in the ring with someone the caliber of Alex Shelley is an accomplishment of itself, I’m completely set on winning. I’m not going to get lost in the moment. The only path I’ll see is the one that has my hand raised after that second bell.”

For more information about this event, you can go to www.aiwrestling.com
You can follow on Twitter @aiwrestling