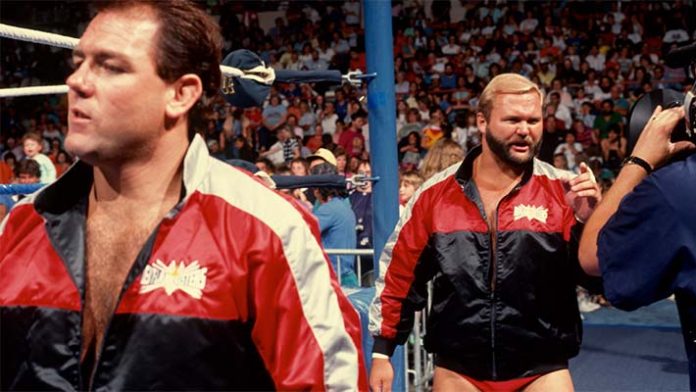 “Once we figured out what had happened and they weren’t going to hire him, I mean, that was probably the last conversation that we had for maybe 10 years. I didn’t blame Tully. I blamed Jim Herd. For him to look at me and say we weren’t worth as much as singles as we were as a team, and since Tully was not going to be hireable because of what had happened, he was going to cut me 150 grand. My focus with Herd went off of Tully because Jim Herd wouldn’t have been smart enough to come up with that. Somebody told him that and who knows who it was. Maybe somebody was fulfilling a grudge from times past? I don’t know. But when I went home and discussed it with Erin (Arn’s wife), she was the voice of reason. She said you’ve made the move. It’s still a lot of money over a three year period. We can plan our lives. She said all the right things. It’ll be fine. The main thing that I had in my back pocket was I was going from 24 days on the road to about 8, and even though the contract got screwed a little bit on what it was supposed to be, that was still my chance to be home when I’d never been home. I’ve been on the road with Crockett, been on the road with WWE, I mean every day, and this gave me an opportunity to spend some time with my family and that just was the most important thing for me.”

Arn was asked if he believes in house shows as a way to improve or if working indies is just as good:

“I don’t think it is as good because when you have an in-house company, you know who the players are, you work with them night after night, and you learn together. Your best intentions are to strengthen your company if you’re all working for a single company and wrestling every day or on the weekends or whatever it may be. I think on the Indies, you don’t have enough guys there with experience to teach the younger guys everything from locker room etiquette, in-ring etiquette, to the different styles and not step on each other’s stuff in the course of the night. Don’t do a guy’s finish in an earlier match as a high spot and all those rules don’t get taught as well as they should I think because there’s nobody there with the experience that has been in a territory for 10 or 15 years. So you know, the best case scenario, I think, even though guys, you know, it lengthened their schedule would be to work for an individual company, run your house shows on Monday, Friday, Saturday, Sunday, or Friday, Saturday, Sunday, Monday, or Thursday, Friday, Saturday, or whatever it may be, but have a succession of days to where things you can do last night that didn’t work, well let’s tweak it, and what didn’t happen the next night, let’s tweak it. That’s the way you learn. That would be my first choice.”

You can listen to the podcast via AdFreeShows.com.