Ring Of Honor Wrestling sent out the following:

The first-ever two-time ROH World Champion Austin Aries shocked the world when the self-professed “Belt Collector” showed up at 16th Anniversary and said that he was looking for one belt that he never held in Ring of Honor, the World Television Championship.

At the time, one of Aries’ best friends Kenny King was World Television Champion. Aries once again showed up unannounced, this time at Supercard of Honor to provide special guest commentary for the Last Man Standing Match for the World Television Championship. Following Silas Young’s victory by devious means with an assist by Beer City Bruiser at that event, Aries ran ringside and ended the attack with a suicide dive.

Aries has declared he is coming for his shot for the World Television Championship and his request has been granted at War of the Worlds – Chicago as part of the international television taping!

Silas Young and Austin Aries are both men in rarified air in the annals of ROH history. Aries became the first man to win the ROH World Championship twice when he won a triple threat in 2009, defeating Champion Jerry Lynn and fellow challenger Tyler Black while Young is just the fourth man ever to win the ROH World Television Championship twice, joining Jay Lethal, Roderick Strong, and Kenny King.

Since Aries last won the World Championship, he has traveled all around the world, becoming one of the world’s biggest stars. Aries last competed in ROH in 2015 after a near-five-year hiatus and returns adorned in championship gold!

Amazingly, these two men who have roots in Milwaukee, have crossed paths before in Ring of Honor but at completely different points of their careers! The two first met over ten years ago in one of Young’s first matches in ROH at ROH Return Engagement. In two singles matches, the second at Motor City Madness 2009, Aries is 2-0 against Young. But so much has changed since then: Aries is at the top of his game as evident by the abundance of championships from around the world he is holding while Young has established himself and the World Television Championship at the top of the ROH marquee!

Who will win this ROH World Television Championship bout? Be the first to know and see it before it airs on television when Ring of Honor and New Japan return to Chicago for the War of the Worlds Tour! This event is an international television taping to be broadcast around the globe and will not be shown live on HonorClub.

There is nothing like seeing the hard-hitting, fast-paced, in-your-face action of ROH LIVE! The War of the Worlds Tour returns this Spring with action from top to bottom featuring all of your favorite Ring of Honor and New Japan stars! Dream matches, feuds, and championships will all be decided as the Lowell, Toronto, and Royal Oak stops will be aired LIVE on HonorClub with Chicago taking place as an international television taping! Limited tickets remain for Lowell and Chicago but you do not want to waste any more time! These events WILL sell out – get your tickets now! 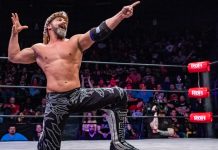