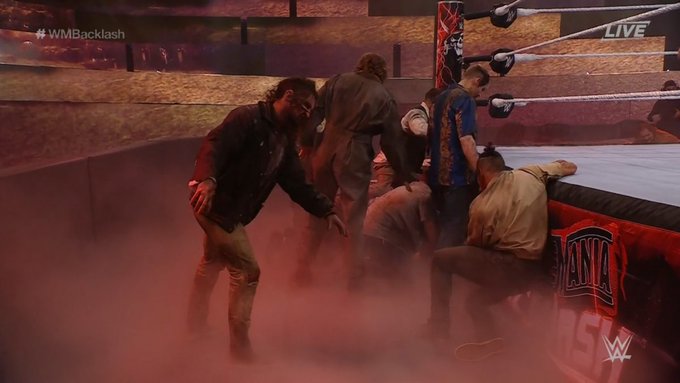 As a native of Western Pennsylvania, I can appreciate the zombie genre, as the legendary George A. Romero filmed the cult classic and extremely influential “Night of The Living Dead,” the movie that kick started much of the zombie playbook, in the region. You might’ve noticed Corey Graves mentioned the Monroeville Mall, the site of one of the franchise sequels and another classic “Dawn of The Day” on commentary during the show.

Considering the nature to “fight” the zombies to stop them, it almost seems natural for a pro wrestling spin on the post-apocalyptic world, especially because of the history of both being linked to the same area. This would make a fun zombie casino game at kaszinó – who offer players a massive variety of slots

However, for whatever reason, nobody has been able to correctly put together a successful mixture of the two, and the Backlash lumberjack match was no exception. Several years ago, some B-level film maker produced “pro wrestlers vs. zombies,” a D-level presentation that is 90 minute of a poorly-edited film that is on par with the infamous “Heroes of Wrestling” pay-per-view. The audio mix is so awful that it unintentional resembles those old Godzilla movies at times when you can tell the dialogue isn’t quite in sync with the lines actors say on screen.

I would rather watch an hour and a half of Great Khali matches than sit through another viewing of Pro Wrestlers vs. Zombies.

Despite the billion dollar TV contracts and the record-setting profits the company has touted in recent years, the WWE had its own B-level production at Backlash. Yes, I know it’s easy to bury the segment since the level of terrible is blatantly obvious, but I think the ripple effect of such a horrendous skit goes beyond just the seven minutes it had at the pay-per-view.

Don’t get me wrong, I understand that the WWE is a global publicly traded corporation, and advertising dollars are one of their biggest revenue streams, but whatever they got paid for the Army of The Dead spot wasn’t enough for how lame it made their product look in the process of collecting the cash. Again, it’s pro wrestling so you can stretch the limits of logic in some situations, but there’s a fine line for that, and as I’ve discussed in recent months, stuff like the swamp fight, The Fiend nonsense, and the zombies completely jump the shark.

If management had a wrestler open the door backstage like John Morrison did and happened to find zombies, it’s goofy, but you can get away with it so there’s no damage to the rest of the show. You can pack the broadcast with the Army of The Dead commercials and still get the point across to let fans know that Batista is in the film. When the office give zombies a segment on the show, it ultimately distracted from a solid event and instead of the angles, the talking point of Backlash will be the goofy zombies.

Obviously, how something is presented is the key to anything if it gets over, but as I’ve said several times about some of the more outlandish WWE angles, pro wrestling is based in reality and wrestlers aren’t actors since they portray a continuous persona. For example, if you meet Al Pacino, he’s not going to sign “Tony Montana” for an autograph because his role as a Cuban kingpin was contained to two hours of the movie. If you go to an autograph signing, Roman Reigns isn’t going to sign his name Joe Anoa’i because of the nature of the role that wrestlers have in sports entertainment. The fact that sports entertainment is based in reality is important because the narrative doesn’t allow for Braun Strowman to bring a ray gun to the ring to attempt to win the championship from Bobby Lashley. Sure, it’s not typical that Stone Cold Steve Austin would drive a beer trunk to the ring, but assuming the former WWE champion has a driver’s license, it’s at least within the realm of possibility that he could drive a truck to the ring.

The way the zombies were presented and the context of the segment are what took the whole thing too far. It wasn’t meant as a comedy skit, the wrestlers and the announcers sold it like they were in danger as if there were actual zombies around the ring. The announcers went as far as to claim they had to relocate from a “safe” spot in the Thunder Dome. Is the audience supposed to believe that actual zombies were around the ring? Furthermore, how did the zombies know to follow the rules of a lumberjack match since they didn’t get into the ring until after the bell? If a person that used to watch wrestling in the Attitude era sees the clip on social media, what would the reaction be?

Sure, everyone knows that pro wrestling is scripted, but the ability for a perform to connect with the audience and for the crowd to believe in that perform is what allows for an emotional investment into the character. The emotional investment into a persona is what draws money in sports entertainment. The WWE audience didn’t necessarily have to believe that Stone Cold hijacked a cement mixer to destroy Vince McMahon’s car, but they believed that Steve Austin was a gritty pro wrestler from Texas that drove a truck and drank beer, and that’s basically who he was so there was an authenticity that the fans could identify with for the product.

The audience isn’t going to believe the zombies and when The Miz resurfaces later, it will reinforce how phony the segment was so if the viewers know they shouldn’t believe in the Miz’s brief hiatus then why should they believe WWE management when Bobby Lashely or Drew McIntyre are pushed as top stars on the same show?