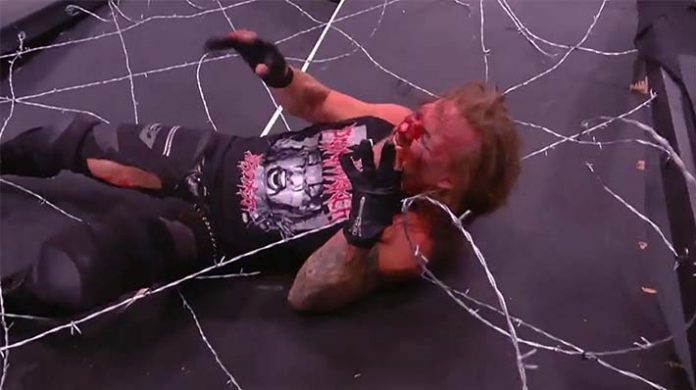 There appeared to be a swerve and a babyface turn after Jungle Boy made his comeback in an attempt to exact revenge on Christian Cage during this week’s AEW Dynamite: Fyter Fest show. Luchasaurus blocked Jungle Boy’s path as he approached the ring carrying a chair, but he moved out of the way to let Jungle Boy pursue Cage through the crowd. Although it initially seemed like a babyface turn, there’s always a chance that Luchasaurus is still technically a heel because this could be all part of Cage’s plan.

The Jericho Appreciation Society was locked in a shark cage above the ring so they couldn’t intervene and it was chaos from the get-go.

At ringside, Tay Conti was ready to attack Ruby Soho, and Anna Jay ran out. Jay attacked Soho, making it clear that she has turned heel.  When the shark cage was lowered, Conti attempted to free JAS with the key but was unsuccessful. However, the JAS could exit through a gap between two of the bars.

The JAS escaped the cage and attacked Kingston until the Blackpool Combat Club made the save. However, Sammy Guevara returned from his brief hiatus and helped Jericho score the victory over Kingston.

Eddie Kingston became extremely irritated when the match ended since things didn’t seem to go according to plan. Below are video clips from the Barbed Wire Everywhere match and the Jungle Boy segment.

Anna Jay intervenes in the brawl between Ruby Soho and Tay Conti, but THAT was unexpected!! #AEWDynamite #FyterFest Night 3 is LIVE on @TBSNetwork! pic.twitter.com/177T5ZLkvU

The Painmaker goes to all lengths to get the victory in this barbed wire everywhere death match against Eddie Kingston! #AEWDynamite #FyterFest Night 3 is LIVE on @TBSNetwork! pic.twitter.com/x1bqDhbzxO

Luchasaurus has made his choice and Christian Cage is livid! Tune in to #AEWDynamite #FyterFest Night 3 LIVE on TBS right now! pic.twitter.com/kjZC30h4tW