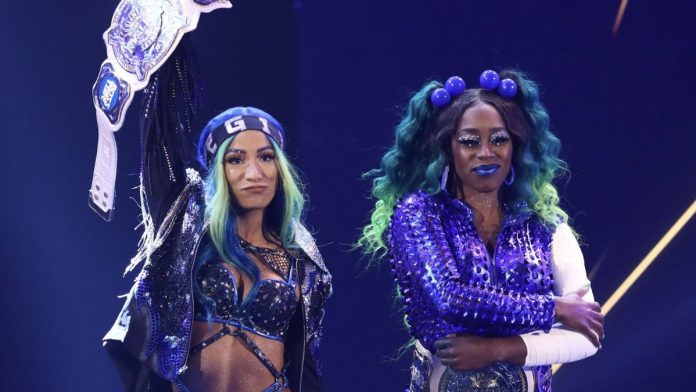 According to reports, WWE officials are attempting to make things better with Sasha Banks.

As PWMania.com previously reported, Banks and Naomi reportedly left RAW on the May 16 broadcast due to unhappiness with the creative. The WWE then declared the two were suspended and stripped them of the WWE Women’s Tag Team Titles. They were suspended without pay, it was later discovered. Additionally, their merchandise was removed for the period of the suspension. There haven’t been many significant developments since then, but on June 15, a reliable source, Raj Giri of WrestlingInc, reported that Banks had been released from her contract. The claim was then confirmed by WrestleVotes, who noted that rumors of Banks’ release were circulating at SmackDown behind the scenes. Additionally, it was said that Banks’ attorneys had been preparing for and were now working on her release.

Giri issued an update on the Banks matter this week, noting that the release of Banks was obtained on June 10th. There is speculation that WWE “leadership is trying to smooth things over,” in order to perhaps keep Banks with the company, which would explain why WWE has not commented on Banks’ release or removed her from the company.

According to this latest report, Banks’ release on June 10 “came from” Erika Schreiber, WWE’s Vice President of Business & Legal Affairs for Talent Relations. She apparently gave her OK for the release.

Nobody at WWE is reportedly denying that Banks was released, which is rare at this point given how many weeks have passed. According to an earlier report from June, sources in WWE were not denying that Banks had been released; they were simply not confirming it.

PWInsider reported that Banks and Naomi were still listed on the internal WWE roster as active as of Tuesday morning this week. This article stated that since Banks and Naomi quit RAW last month, there has been no internal change regarding their position and that neither has been publicly released. As officials work to resolve issues, it’s possible that the release hasn’t reached other sources within WWE. With regard to Banks’ release, Giri stands by his source and initial account.

As of the time of writing, Banks and Naomi are still featured on the official WWE SmackDown roster page.

WWE declared that a tournament would be organized to crown new WWE Women’s Tag Team Champions after suspending Naomi and Banks indefinitely and without pay. However, there has been no update on that event either.