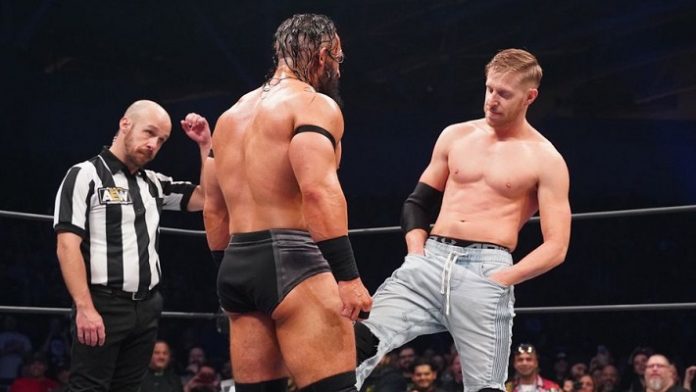 The original finish to the PAC vs. Orange Cassidy #1 contender’s match on last night’s AEW Dynamite show had to be changed.

The match ended in a double count out, and it was then announced that Kenny Omega will defend his AEW World Title against PAC and Cassidy in a Triple Threat at Double Or Nothing.

In an update, PWInsider reports that the original plan was for PAC and Cassidy to go to a 20 minute time limit draw, which would’ve led to the Triple Threat announcement.

Cassidy went down hurt after the Sunset Flip Powerbomb spot to the floor (or a stiff kick to the head), but still kept trying to get up to return to the ring and finish the match. An audible was called to have Cassidy stay down and to ring the bell.

The Triple Threat at Double Or Nothing was always the plan, but PAC and Cassidy were originally supposed to go to a 20 minute time limit draw.

Regarding Cassidy’s status, it was noted that he was OK after the show.

Went back and recorded. Convinced it’s the kick. OC is a good seller but that looked like he was legit rocked. pic.twitter.com/2emeZGzaYc

Tony Khan Talks AEW Dark Being Like Developmental, WWE Being Interested In The Acclaimed Before He Signed Them, & More

Details On How AEW Will Tape All Shows Once Rampage Premieres