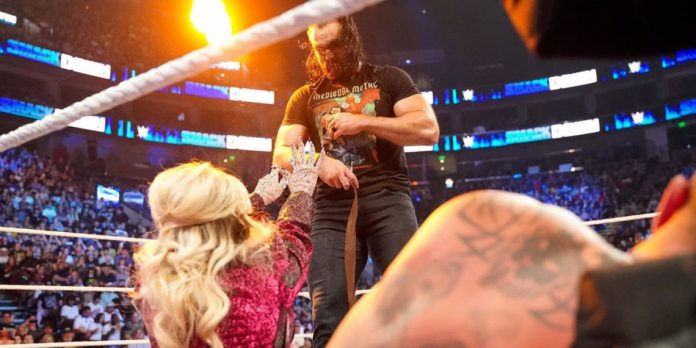 Friday’s WWE SmackDown on FOX featured a segment with Drew McIntyre, Karrion Kross, and Scarlett in which a Strap Match between Kross and McIntyre was announced for WWE Extreme Rules on October 8. Scarlett threw herself between the two Superstars to prevent an attack on her husband during the segment. McIntyre approached and sprayed him with what was later confirmed to be a fireball. Scarlett later brought McIntyre down with a low blow from behind, prompting Kross to submit him with the Kross Jacket.

Scarlett missed her mark, and the fireball was almost impossible to see in the first live shot of the segment. When WWE returned from commercial, the replay showed Scarlett spraying a fireball in McIntyre’s face.

A new report from Fightful Select confirms that the flash paper fire spot did not go as planned.

According to a source, the flash paper was not ready for live TV and did not work in a situation where it needed to catch enough of McIntyre’s face to sell the angle.

It was mentioned that Kross was told to keep the angle going, and he and McIntyre improvised the rest of the segment.

According to reports, the flash paper was delivered to the Vivant Arena by the same team that flew the WWE jet to Salt Lake City for Friday night’s SmackDown. It was not obtained locally or transported with the WWE prop team.

Here are several shots from the segment on SmackDown, along with full video: