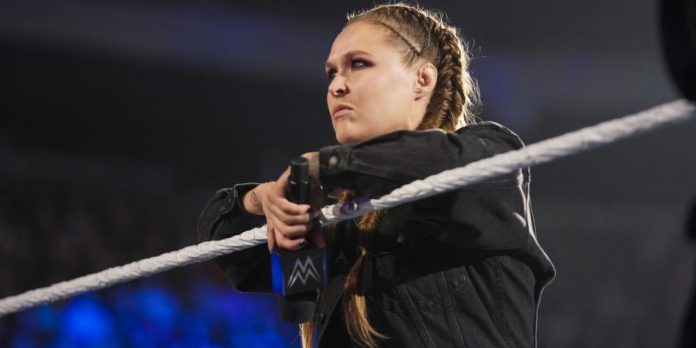 After Liv Morgan won the SmackDown Women’s Title at Money in the Bank in early July, WWE scheduled a rematch between Rousey and Morgan at SummerSlam.

Rousey submitted Morgan with her shoulders trapped to the ground just before the referee counted to three, bringing the match to a controversial finish. After the match, Rousey turned heel and attacked both Morgan and the referee after the referee awarded Morgan the victory.

Due to Rousey’s conduct, WWE announced a storyline fine and suspension for her. She won’t be gone for very long, though. Rousey is currently being advertised for Clash at the Castle on September 3.

“Not that long. She’s booked on the Cardiff [Clash at the Castle] show, so she’s going to be unsuspended at least before…I don’t know when she comes back. She’ll be out for I don’t know how long, but it’s not going to be a month. Put it that way because she’s got to be back for the pay-per-view show.”

The WWE Clash at The Castle Premium Live Event will be broadcast from Cardiff, Wales’ Principality Stadium on Saturday, September 3. The show will be aired live on Peacock at 1pm ET and 10am PT.

The WWE website currently lists Reigns, McIntyre, WWE United States Champion Bobby Lashley, RAW Women’s Champion Bianca Belair, Seth Rollins, Becky Lynch, Ronda Rousey, and WWE Hall of Famer Edge as Superstars who will be competing at Clash at The Castle, though no additional matches have been announced as of the time of writing. Stay tuned to PWMania.com for more.