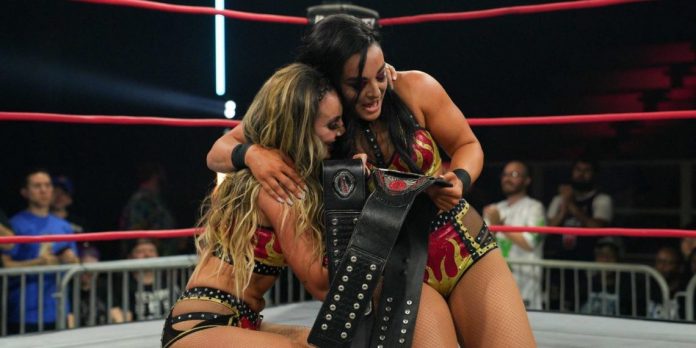 According to Fightful Select, Impact Wrestling has multiple current champions who are not under contract or whose contracts are about to expire. Another current champion is in an unusual contractual situation. This is not the first time Impact has had several champions working without a contract.

According to reports, the Impact World Tag Team Champions The Good Brothers have agreed to continue working with Impact until at least late August, but they are not the only champions with intriguing contract situations. There has been no word on Doc Gallows or Karl Anderson’s Impact futures, but new Impact Knockouts World Tag Team Champion Chelsea Green is still a free agent.

Green, according to reports, has not signed a contract with Impact. While appearing on weekly Impact programming, she continues to work for the NWA, GCW, and several indie promotions. Green returned to ROH and then Impact at Slammiversary on July 17, 2021, after being released by WWE on April 15, 2021. Since then, she has mostly collaborated with her husband, Matt Cardona.

Green’s partner, Deonna Purrazzo, is in an unusual situation. Purrazzo’s contract was set to expire at the end of 2022, but word is that Purrazzo and Impact officials will begin actively discussing her future with the company, specifically signing her for 2023.

Impact officials reportedly believe they have an option year in which to re-sign Purrazzo, but this is not clear.

Purrazzo joined Impact after her WWE release on April 15, 2020, and worked for the first several months without a contract, despite being the Knockouts World Champion. She finally signed a contract with the company, and word is that time was added to her contract after she received a pay raise. This could include the option year, but as previously stated, that is unclear, and the two parties are expected to begin contract negotiations soon.

On an upcoming Impact episode, which was taped this past Saturday night, they will defend their titles against Mia Yim and Knockouts World Champion Jordynne Grace.