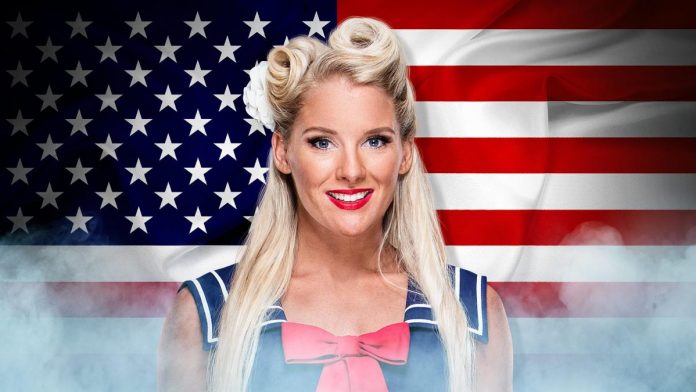 You may be wondering what was up with Lacey Evans’ brief appearance at last night’s Elimination Chamber pay-per-view.

The main roster newcomer strutted down the entrance ramp just before the WWE Championship Elimination Chamber match started, however, she would immediately turn back around and return to the backstage area without entering the ring or speaking on the microphone.

While recapping the Elimination Chamber pay-per-view on Wrestling Observer Radio, Dave Meltzer explained that the segment was done because WWE plans to give Evans a “super big push.”

“So, Lacey Evans is getting a super big push. That is what that is all about,” Meltzer said.

The intention behind Evans’ brief walk on the stage ramp was to further expose her to the WWE Universe and to acknowledge that Evans is an important person to watch.

“The plan is a super big push … I know people who are pretty smart in this business who think the world of her potential. I do think she plays her character real well.”

Following her appearance, Evans sent out a few tweets.

Ya'll didn't think I was gonna sit back and not show my classy face during a PPV did you? #YaNasties https://t.co/Z5H0ND10Vi

After competing in the 2019 Women’s Royal Rumble Match last month, Evans wrestled her first televised singles match as a member of the main roster on February 4. She lost to Natalya in a match taped for that week’s episode of WWE Main Event.