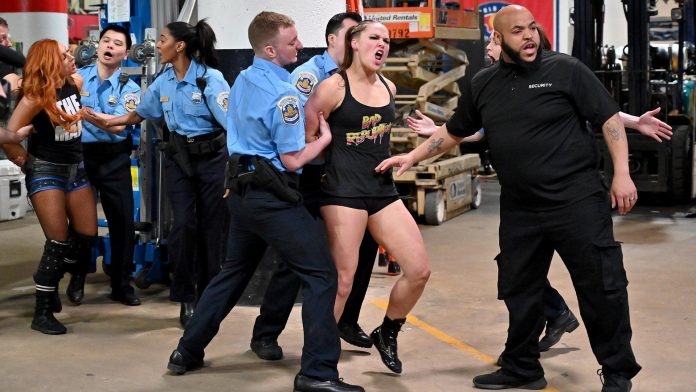 Tasked with keeping things civil in a Six-Woman Tag Team Match just six days before WrestleMania 35, Ronda Rousey, Charlotte Flair and Becky Lynch dutifully kept their hands off each other, successfully evading the pitfall of a stipulation that any woman who betrayed their team would be removed from Sunday’s main event. But the second Rousey submitted Liv Morgan to earn her team a win over The Riott Squad, the fists started flying, with “The Baddest Woman on the Planet” throwing the first punch against Charlotte Flair.

A crew of security guards proved ineffective at best, as did a squadron of police officers. The three Superstars’ continued aggression in the presence of the police, however, landed all three of them in handcuffs and it got even more frantic once the three main-eventers were escorted backstage: The cops made the mistake of putting Ronda and Becky in the same car, leading to a scramble in the backseat in which Ronda kicked out a window. When they attempted to transfer Becky to the same car as Charlotte, those two started kicking at each other while a still-handcuffed Rousey somehow commandeered the town car she was in and drove it into the squad car. The cops finally restrained “The Man” in the police vehicle, leaving Rousey and Flair to argue until “The Queen” kneed the Raw Women’s Champion square in the side of the head to end the brawl.

Following Raw, WWE.com announced that Rousey, Lynch and Flair have all been released from custody.

WASHINGTON, D.C. — Raw Women’s Champion Ronda Rousey, SmackDown Women’s Champion Charlotte Flair and Becky Lynch have all been released from police custody of their own recognizance and will appear in court at a later date.

Stay with WWE’s digital platforms as this story develops.

Just got out of jail, and all I got was this same lame mugshot @beckylynchwwe got from Atlanta

On another note, the segment was not live. According to Meltzer, it was taped before Raw and edited. You can see the edits if you watch closely.