Shayna Baszler has reportedly been removed from Raw TV because Vince McMahon soured on her as he never conceptually grasped the idea of the style that a MMA fighter should use in wrestling. Baszler also didn’t check Vince’s buttons when it comes to women in wrestling. He made the call to stop her push and pull her from TV, before Paul Heyman was released from the Executive Director job.

Baszler has been off TV since beating Natalya on 5/18 in a Submission match. There is no word on when she will be brought back. 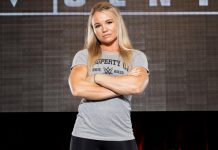