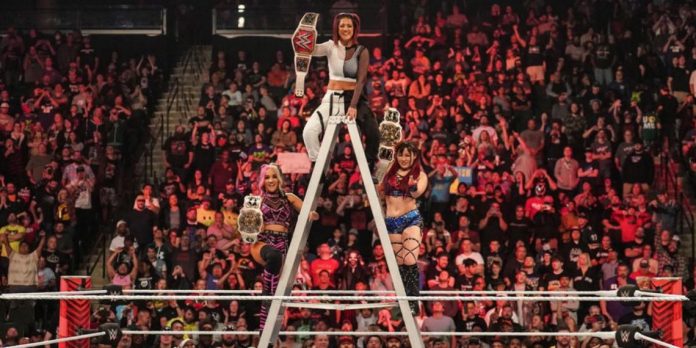 The Extreme Rules go-home edition of WWE RAW on Monday featured two major segments promoting Saturday’s Ladder Match between Bayley and RAW Women’s Champion Bianca Belair, and word is that a mandate was handed down over the ladders used in the segments.

Monday night, WWE held the Bayley vs. Belair contract signing, and while ladders were not used, they were set up around and inside the ring. Later in the RAW main event, WWE Women’s Tag Team Champion IYO SKY defeated Alexa Bliss, and Damage CTRL used ladders in their attack on Bliss, Asuka, and Belair. Damage CTRL was posing on a ladder in the middle of the ring when RAW went off the air.

A new report from Fightful Select notes an interesting production mandate for the ladders used in those segments in an update. Only 8-10 foot ladders were permitted to be used.

In singles action, WWE Women’s Tag Team Champion Dakota Kai defeated Candice LeRae. While Kai arrived at the ring with Bayley and SKY, LeRae arrived alone and dealt with interference until the end.

According to reports, WWE had planned for Asuka, Belair, and Bliss to accompany LeRae to the ring, but that plan was scrapped. There’s no word on why this didn’t happen, but we last saw LeRae on RAW. As previously stated, the other Superstars were featured in additional segments throughout the show, but LeRae was not one of them.