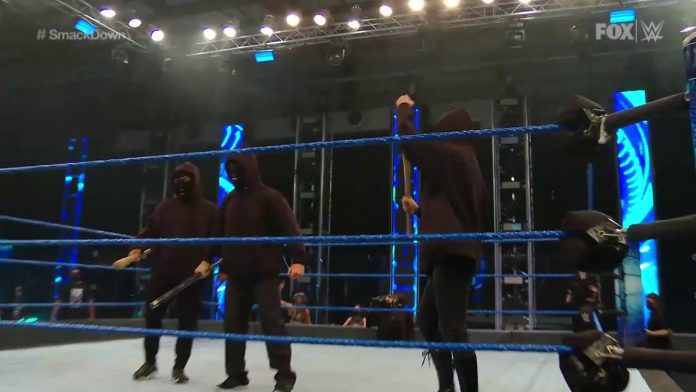 The people used under the masks and hoods on Friday’s SmackDown were not the wrestlers who will be playing the actual Retribution characters when the group members are revealed, according to Dave Meltzer on the Sunday Night’s Main Event podcast.

There has been speculation on Tommaso Ciampa and Dominik Dijakovic possibly being affiliated with Retribution after their social media accounts were blacked out last week, but many fans pointed to how none of the people used on SmackDown resembled Ciampa or Dijakovic. There was a lot of negative attention brought to the fact that most of the people used on SmackDown seemed to be smaller in size, closer to the build of someone like The Singh Brothers than someone like Dijakovic.

There’s also been a lot of speculation that Vanessa Borne was the key female talent under a mask on SmackDown, based on her hair and other factors. Meltzer speculated that during the Retribution attack angle in the crowd of developmental trainees on SmackDown, WWE went through some extra effort to show that a female member of the group was attacking the female developmental trainee, so it wouldn’t look like a man was attacking a woman. Borne has been planned for a main roster call-up from WWE NXT for a few months now and because of that, there is some extra speculation on her being used for the invasion angle on SmackDown. It should be noted again that just because WWE used a wrestler for the masked invasion on SmackDown, that does not mean they will be used as a member of the group when they are all revealed.