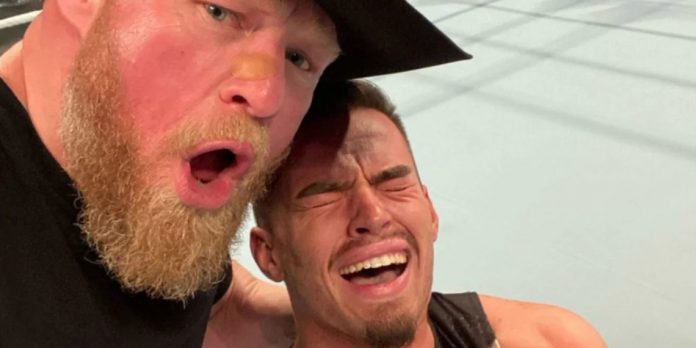 The main event of the March 5 WWE live event at Madison Square Garden in New York City saw Brock Lesnar defending his title against Theory in a bout that had not been advertised before. Although Lesnar was scheduled to defend, there was no opponent mentioned.

According to a recent report from Fightful Select, WWE executives kept the identity of Lesnar’s opponent a secret and close to their chest even backstage before the match. Even Theory, who eventually appeared and fell to Lesnar in roughly 90 seconds, was surprised when he learned he would be competing against Lesnar in the middle of the event.

Theory stated that he didn’t find out about the match with Lesnar until just before the bell rang. He said that the card listed backstage only had “Brock Lesnar vs. —-” on it. A few weeks prior to this bout, Lesnar and Theory worked on RAW to create the infamous selfie seen above.

Theory said that he always felt like he was under a WWE NXT contract and that he was never officially brought up from NXT in 2020. He pointed out that Rezar from AOP was injured and that he had only been invited to RAW to fill in for him. Theory didn’t ever feel as like his move to the main roster was official during that time.

Theory expressed his gratitude for having had the opportunity to spend time with Johnny Gargano, Candice LeRae, and Indi Hartwell as a part of The Way since he thought it allowed him to grow. Although Theory’s role in The Way was initially only intended to be that of a bodyguard to the other members of the group, things turned out nicely, and Theory’s responsibilities grew.

Theory continues to be associated with Mr. McMahon in the storylines after working with WWE Chairman & CEO Vince McMahon over the past year. He said that each take required giving your best effort when working with Vince.

At Saturday’s WWE Money in the Bank event, Theory lost the WWE United States Title to Bobby Lashley but went on to win the Men’s MITB Ladder Match to earn a shot at the title. He will go up against Lashley for the US championship on July 30 at WWE SummerSlam.