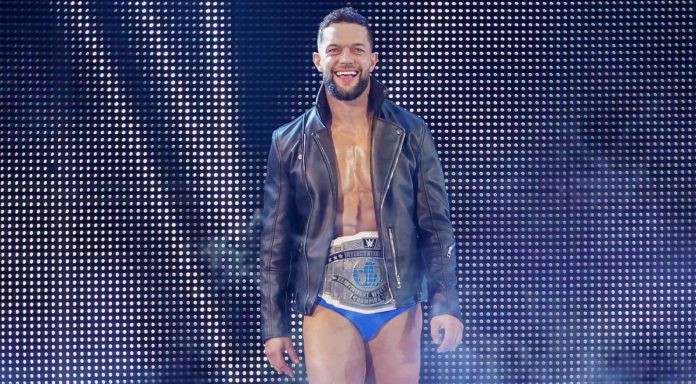 Nakamura won the title in a short match. After Balor missed the Coup de Grace, Nakamura hit Balor with the Kinshasa to the back of the head and then hit him with a traditional one to score the win.

This is Nakamura’s first reign with the Intercontinental Championship. Balor won the title at WrestleMania 35 by defeating Bobby Lashley.

According to Brad Shepard of Pro Sports Extra, it was Heyman’s decision to have Balor lose the Intercontinental Championship. Balor’s character is going in a new direction as their are plans for him to join The Club on Raw.

I’m told Finn losing was Paul Heyman’s call – the idea is having him eventually join the Club. https://t.co/doIAuBy0Fy

Shepard also claims that Heyman got upset with Balor and Nakamura wrestling on Extreme Rules Kickoff instead of the pay-per-view.

According to a source in #WWE, there was lots of confusion as to why the Intercontinental Championship match was not on the main card. I’m told Paul Heyman was more upset about it than Finn Balor. #WWE #ExtremeRules

It should be noted that Mike Johnson of PWInsider and Ryan Satin of Pro Wrestling Sheet are disputing the rumor of Heyman being upset over the Intercontinental Championship Match taking place on Extreme Rules Kickoff. According to Johnson, some WWE talent brought the rumor to Heyman’s attention backstage during Extreme Rules and joked about with him.

No truth to story making rounds @HeymanHustle was upset backstage at Extreme Rules over IC title being on Kickoff Show. In fact, talent were showing the rumor to Heyman & joking about it with him backstage tonight. No blowups backstage at PPV with anyone, Heyman or otherwise.

According to reputable sources, the random report claiming Paul Heyman was upset about Finn Balor vs Nakamura taking place on the kickoff show is false. I’m told people were laughing about the report backstage and one source in the know said it’s “one hundred percent bulls*hit.”

Shepard responded to both Johnson and Satin with the following:

Mike Johnson (who thought John Cena was going to be a special guest referee in the Baron Corbin versus Kurt Angle WM match) and his sources had no idea what was going on last night backstage, yet they were conveniently able to tell him this. Can you say worked? pic.twitter.com/qa4uKGZhEg

All of these reputable sources backstage and yet you don’t have a clue about what’s going on tonight. pic.twitter.com/rQc0Zkcv8q

What better way to kick off tonight's action than with a FIRED UP @FinnBalor?! 🔥 #ExtremeRules #ICTitle pic.twitter.com/KmDLVHkkzu

This is how you do it.

THAT is how you kick off #ExtremeRules!! @shinsukenakamura has done it! #AndNew