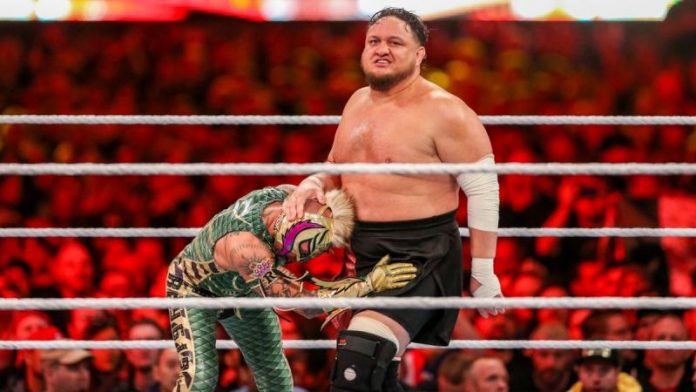 – In a rematch from WrestleMania 35, Rey Mysterio beat Samoa Joe at WWE Money in the Bank to become United States Champion for the first time in his illustrious career.

Sunday marked an opportunity for Mysterio to bounce back after Joe beat him in one minute at WrestleMania. Mysterio scored a quick win himself at Money in the Bank, though it came in controversial fashion since Joe’s shoulders were seemingly off the mat.

According to PWInsider, WWE cut the match short due to blood coming out of Joe’s nose.

Joe apparently suffered a broken nose at the start of the match after taking the senton from Mysterio. Though the match quickly ended, WWE went forward with the planned post-match angle that saw Joe beat Mysterio down while Dominick watched.

– Brock Lesnar’s return to WWE at the Money in the Bank PPV was reportedly kept a secret and Lesnar was hidden from everyone during the show. It appears that only a few people knew Lesnar would be on the show until he appeared at the gorilla position.