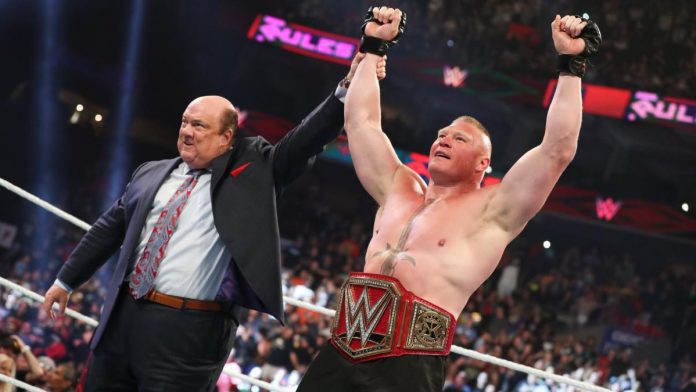 Brock Lesnar cashed in his Money in the Bank contract last night at WWE Extreme Rules and defeated Seth Rollins to win the Universal Championship.

After teaming with Becky Lynch for a victory over Baron Corbin and Lacey Evans in the main event, Rollins had little time to recover before Lesnar’s music hit.

Lesnar quickly entered the ring and hit a pair of German suplexes on Rollins. From there, the bell rang to officially signal his cash-in and he immediately delivered an F-5 to Rollins to put him away.

According to WWE insider Tom Colohue, WWE had Lesnar cash in his Money in the Bank contract at Extreme Rules and win the Universal Championship to give Rollins an opponent for SummerSlam. This was a recent creative decision as the feeling is that Rollins needs to feud with Lesnar due to limited options.

Brock Lesnar might be cashing in at #ExtremeRules tomorrow just to give Seth Rollins a noteworthy match at Summerslam. #WWE

Per the same #WWE source that told me Lesnar was cashing in to give Rollins an opponent for Summerslam:

"This wasn't the plan until recently, when it was clear how thin #Raw was on top. Seth needs Lesnar."

Here is a fan-shot video of Lesnar defeating Rollins to capture the Universal Championship.

With the win, Lesnar rebounded from dropping the Universal Championship to Rollins at WrestleMania 35 and is now a seven-time world champion in WWE.