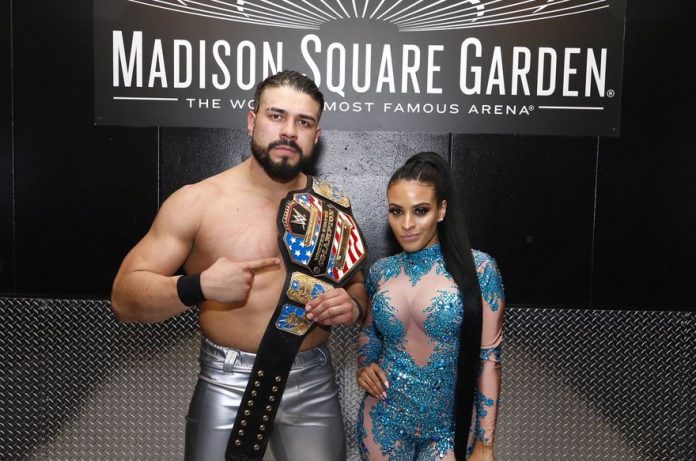 As noted, WWE United States Champion Andrade has been suspended for 30 days due to his first violation of the WWE Wellness Policy. The suspension begins today, as WWE officially announced it this afternoon.

WWE creative did not know of the suspension until Monday afternoon. WWE doesn’t have to suspend wrestlers as soon as Wellness violations come back, as the policy is to tie up loose ends first, then announce the suspension. Dave Meltzer noted on Observer Radio that WWE creative found out about Andrade’s suspension on Monday and went from there, writing him off TV with Humberto Carrillo dropping him on the exposed concrete with a DDT.

There’s no word yet on when the positive test came back, but only Vince McMahon and other WWE high-ups knew about the violation before yesterday. Meltzer also noted that no one knew of the violation on Sunday, before Andrade retained over Carrillo on the Royal Rumble Kickoff pre-show, but maybe the WWE higher-ups in Vince’s inner circle. It is possible that Vince and the other higher-ups didn’t find out about the suspension until Monday.

Carrillo’s DDT to Andrade wasn’t in the original RAW script for last night. The decision was made by RAW Executive Director Paul Heyman to keep the title on Andrade. The usual protocol would be to drop the title, but Heyman is very high up on Andrade and felt like it was too early in the feud with Carrillo to put the title on Carrillo, according to WOR.

Heyman reportedly wants to make Andrade a real “franchise player” and while that doesn’t mean Carrillo won’t beat Andrade in this feud, Heyman does want to establish Andrade as a cornerstone talent for the company.

Andrade is one of the newer talents that Heyman is really high up on. That group also includes The Viking Raiders, Drew McIntyre and Aleister Black, and guys like Carrillo and Erick Rowan as well. While McIntyre will be the one challenging WWE Champion Brock Lesnar at WrestleMania 36, Meltzer noted that Black had been in the running for the match with Lesnar. There’s no word yet on why they went with McIntyre over Black, but a big push for McIntyre has been talked about for more than a year.

There’s no word yet on what led to Andrade’s violation, or what they have planned for him when he returns, but stay tuned as we will keep you updated.