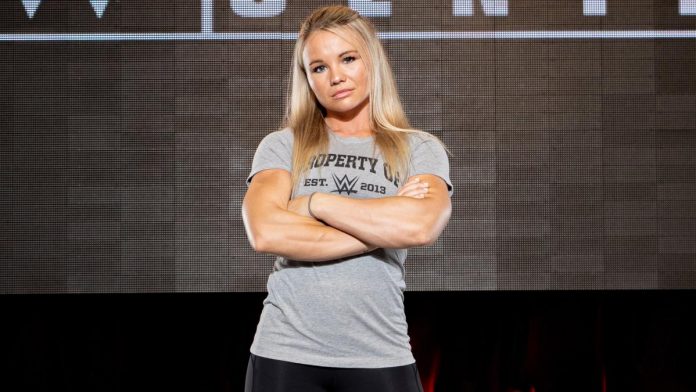 WWE NXT talent Emily Andzulis was reportedly told to hold off on her MMA and fighting skills during last night’s RAW Underground bout with Shayna Baszler. As noted, Week 2 of RAW Underground featured the first round of female action as Shayna Baszler fought off three competitors – NXT’s Emily Andzulis, and two indie wrestlers, Marina Tucker and Sofia Castillo. The fight ended with Baszler forcing Andzulis to tap out.

Andzulis trains Jiu-Jitsu and has done other MMA training in the past, but she was reportedly told not to use any of these skills for RAW Underground, according to Bryan Alvarez of Wrestling Observer Live. It was noted that officials told Andzulis to just pretend like she doesn’t know what she was doing in the ring as Baszler was going to beat her up. There was no reason given for why WWE wanted Andzulis to forget about relying on the skills she’s picked up in training, but it looks like they wanted to book Baszler as the elite fighter of the four.

The 28 year old Andzulis has one amateur MMA fight on her record – a flyweight loss to Shay Holland on January 6, 2018 for the Valor Fights promotion in Knoxville, where she fought out of. Andzulis previously competed on season one of The Rock’s Titan Games on NBC, and was signed by WWE in January of this year. She had a WWE tryout in April 2019 and after that she began training at the JPWA Academy in Knoxville, TN, which is owned by WWE Legends Kane and Dr. Tom Prichard. Andzulis worked a few NXT live events in February of this year, but hasn’t picked up a win yet.