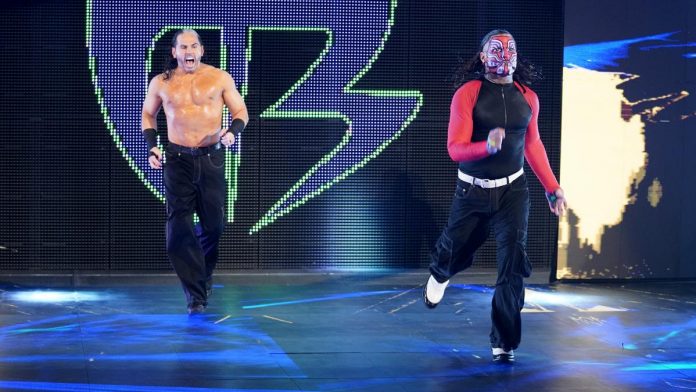 In his home state of North Carolina, Matt Hardy made a surprise return to WWE television on last night’s episode of SmackDown LIVE.

As Cesaro and Sheamus were in the ring, The Hardy Boyz’ music hit and Matt and Jeff Hardy came out to face them. The finish of the match was Matt hitting the Twist of Fate on Sheamus, tagging Jeff in, and Jeff hit the Swanton Bomb to get the win.

After their surprising return and win over The Bar, Matt explained why they reunited.

“I think we sent a very specific, special message today, and basically that is this: myself, Matt Hardy, and “The Charismatic Enigma,” Jeff Hardy, we are the greatest tag team in all of time and space, and we are back together to prove that without a shadow of a doubt,” Matt said.

“Myself, I know the last time people saw me I was “Woken” Matt Hardy. Well, I have learned how to control the woken wonder that is inside of me, the broken brilliance that is inside of me. And together everyone is going to learn that myself and my brother Nero, Jeff Hardy, we are unstoppable, we are indestructible, we are unkillable. The greatest tag team in all of time and space.”

According to a report by PWInsider.com, the word backstage last night is that WWE invoked a clause in Matt and Jeff Hardy’s respective WWE contracts, rolling it over for the third year. Had WWE not rolled over the deals, both would have expired next month and they would have become free agents.

Matt teased a countdown until the expiration of his WWE deal on social media last week, but it would appear that he was just looking to create a buzz. He actually revealed last Thursday in a tweet that his contract was set to expire 11 days later.

Ah. The thinly-veiled passive-aggressive threat to leave you will inevitably be forced to… DELETE!

Not a threat at all, just a fact. I have 11 days left on my current deal. I love @WWE, but I’m 100% comfortable being outside the walls of pro wrestling’s "Alexandria" Safe-Zone. I’m a born SURVIVALIST.

Last night was the first time Matt had wrestled since September (and on television since August on Raw). Matt took time off to rehabilitate some lingering injuries and get in better shape. He worked behind the scenes as a producer in the meantime.

As a result of Matt and Jeff’s surprise appearance, a match pitting Cesaro against Johnny Gargano (with Sheamus in Cesaro’s corner and Tommaso Ciampa in Gargano’s corner) was canceled. WWE.com had been advertising the match since Saturday.