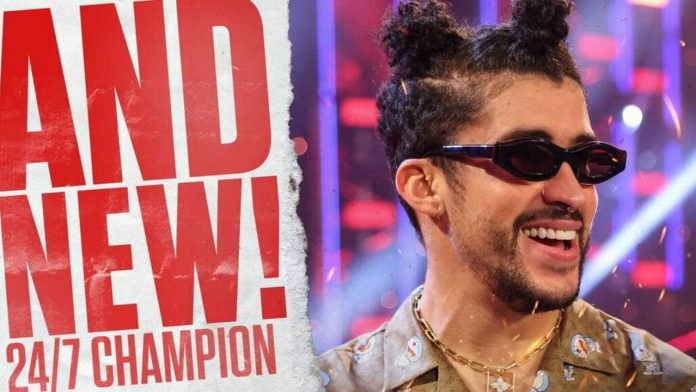 Bad Bunny is money for WWE.

I have to be honest, when I heard that “Bad Bunny” was performing at The Royal Rumble, the only thing I knew about him was that he did a song with Booker T recently. Considering the WWE musical experiments have yielded mixed results in the past, I didn’t have any expectation for what he would bring to the show. You might have Kid Rock at WM 25, who spent more time with Jack Daniels than Jack Brisco before he hit the stage or one of the stellar performances from Motor Head where Lemmy delivered a signature song with his trademark razor blade voice.

After the performance of the song, Bad Bunny did a dive later in the night and eventually won the “prestigious” 24/7 title, which somehow and not surprisingly, some fans complained about on social media.

While I will never listen to the generic sounds of hillbilly country or the sad saga of Joe Bob’s tractor being stuck in the mud, my music selection has a variety of almost everything. From Tupac to Johnny Cash, Neil Young to Marvin Gaye, and Warren Zevon to Linkin Park, I enjoy jammin’ to the tunes. That said, I’m an old soul so despite being in the demographic that might be current on the Bad Bunny trends, I wasn’t familiar with him.

That being said, the fact that I didn’t know his background is irrelevant. The Latin Grammy winner is a draw and if he’s used in the right context, this could be a major boost from the company, especially in the Hispanic market. Within the past week, the majority of Bad Bunny merchandise on WWE Shop was sold out, and includes a variety of t-shirts, as well as posters based on his Rumble appearance. When is the last time new merchandise has sold out on the website? Granted, we know that every time there’s a return or a milestone, there’s another collection of merchandise that goes along with it, which is one of the many reasons Vince McMahon is a billionaire, but how often does the product sell out?

I’ve said it before and I will say it again, in many ways, World Wrestling Entertainment is the Walmart of professional wrestling, it’s the most recognizable and easily accessible sports entertainment product that targets the lower common denominator in an attempt to market to the general public. It’s a harsh reality, but WWE brass doesn’t have to sell themselves to the diehard demographic because that group of fans is already watching the show, and more often than not, the diehard audience isn’t looking for the same content as the causal fan. Dean Malenko was an incredible worker that deserved a lot more credit than he received during his in-ring career, but the fans that buy every type of John Cena t-shirt released aren’t concerned about how well Cena does the Texas Cloverleaf.

In a similar fashion, it’s irrelevant if the subscribers of The Wrestling Observer know who Bad Bunny is or not. Obviously, the guy is a talented musical artist and he has a dedicated fan base that is willing to spend money on his products. Generating revenue is the bottom line and anyone that prioritizes something above that is misguided. The bigger picture goes beyond the WWE Shop sales and certainly beyond the “wrestling bubble” as far as what else Bad Bunny can bring to the table. As mentioned, WWE often markets to the lowest common denominator, which is a part of mass distribution in most industries, but as a result, they don’t often attempt to translate any cultural barriers. For example, we’ve heard for years how important the Hispanic market is in the United States, especially because of the tradition of lucha libre in Latino culture, but who are the Hispanic stars for WWE? Reportedly, they planned to make more Latino stars, but there were lackluster attempts at best, even though they already have the talent on the roster that are capable of being used in those spots.

Rey Mysterio is an absolute all-time legend, but at 46 with a laundry list of injuries in his career, he’s still the biggest lucha star the company has on the roster. Alberto Del Rio had the potential to be a major star for the organization before he was released and he went off a cliff, but he wasn’t fully utilized. Angel Gaza is on the roster right now and is a tremendous talent, but he’s booked as a sidekick. Andrade has all the skills to be a main event star, but doesn’t get a solid push to truly establish him at the next level. It’s debatable how well the Lucha House Party would do in bigger roles, but they don’t even get a chance to be more than glorified jobbers on TV.

In my opinion, if the WWE machine gave some of these Hispanic stars a legitimate chance to establish themselves, they could have the Latino stars of the next generation. Reportedly, Bad Bunny will have a tag match with Damian Priest at Wrestlemania, which makes sense because it gets him booked in a match that can limit what he has to do in the ring and avoids any blunders. For those that complain about him winning the 24/7 title, to quote the late great Gorilla Monsoon, “Will you stop?!” It’s a comedy title that isn’t designed to actually push anyone on the roster so in this scenario, it’s literally just a prop, which is fine because it accomplishes the goal of creating more brand awareness.


Last night, Bad Bunny performed on Saturday Night Live with the 24/7 championship and if nothing else, it puts the WWE brand in the spotlight to an audience that usually doesn’t watch the product. That’s what those in the wrestling bubble don’t understand, Bad Bunny’s involvement is to attempt to draw more fans to the product or at least sample the current product that don’t usually watch it. It’s the same reason Mr. T was used for the early WM events, it brings more publicity to the company to hype the show. Clearly, Bad Bunny is a fan of the product, he can generate publicity, and he’s selling merchandise so from a business prospective, it’s a very successful angle for the company.