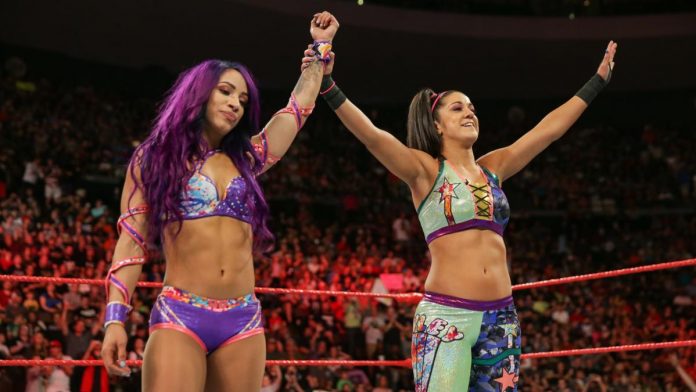 WWE SmackDown Women’s Champion Bayley recently spoke with talkSPORT and expressed interest in locking up with her good friend Sash Banks at WrestleMania 36.

It should be noted that the interview was done before Sunday’s WWE Royal Rumble pay-per-view, which saw Bayley retain her title over Lacey Evans. Banks was scheduled to be in the 30-Woman Royal Rumble Match at one point, but she was pulled over the weekend and there have been rumors & speculation on The Boss suffering from another injury of some kind. Bayley praised Banks and said they deserve to main event WrestleMania after the interviewer pointed out how fans have never gotten the Banks vs. Bayley featured pay-per-view match that they want, and asked if that is still a goal for the two blue brand Superstars.

“Not my fault!,” Bayley said on fans not getting the pay-per-view match. “I would love to, I would love to. She is obviously the best ever, in my opinion. The best to ever do it. But, I guess, if her ankle is OK for the Rumble on Sunday after what Lacey Evans did to her on SmackDown, I would love to see her win the Royal Rumble match. Then I could go on and beat Lacey and maybe we could have that big old main event that we deserve [at WrestleMania].”

Bayley talked again about a potential match with Banks when asked if there are any matches or goals she wants to work towards as we’re now on The Road to WrestleMania 36. Bayley also said she’d be interested in doing a Fatal 4 Way of Four Horsewomen with herself, Banks, Charlotte Flair, and RAW Women’s Champion Becky Lynch. She also said she’d like to see the WWE Women’s Tag Team Titles, currently held by Asuka and Kairi Sane, featured on The Grandest Stage of Them All.

“Obviously, myself and Sasha would be an awesome WrestleMania match,” Bayley said. “And I would love to test myself now against Sasha Banks now. We’ve had many many matches in the past but I feel like we’re both at a different level right now so I’d love to be pit against each other. I’d love a fatal-four-way with the Four Horsewomen – Myself, Sasha, Becky Lynch, Charlotte Flair – and a goal not involving me or involving me, I’d love to see the Women’s Tag Titles being featured on the WrestleMania card because we…worked hard for those things! And I still believe in them and I want to see it.”

Bayley also expressed disappointment in her WrestleMania 34 experience back in 2018. She was asked about being put in the inaugural WrestleMania Women’s Battle Royal instead of facing Banks at the big event that year. Banks and Bayley had told the interviewer that year that they didn’t think they’d get the time to tell their story if they’d gotten the match booked anyway. She was asked if her spot on the WrestleMania 33 card was tough to take. That 20-Woman Battle Royal in New Orleans saw Naomi win by last eliminating Bayley.

“Yes [it was disappointing]. I mean, you always want to be in a marquee match on the card, especially at WrestleMania. So that was a little rough,” Bayley admitted. She then mentioned her WrestleMania 33 win to retain her RAW Women’s Title in the Fatal 4 Way with Flair, Banks and Nia Jax. Bayley continued and said she really can’t be mad at the WrestleMania 34 situation as she and Banks became the first-ever WWE Women’s Tag Team Champions at Elimination Chamber 2019 by defeating 5 other teams inside the Chamber.

“But, if you go back to my first WrestleMania, I went in as RAW Women’s Champion and I defeated Charlotte [Flair], Nia [Jax] and Sasha. And following after the battle royal [at WrestleMania 34] we became the first-ever Women’s tag Team champions. So, I would say I can’t be too mad at it. I also would have won the battle royal if Naomi wasn’t hiding under the ring!”

There’s no word yet on what WWE has planned for Bayley on The Road to WrestleMania 36 after retaining over Evans at the Royal Rumble this past weekend. Women’s Royal Rumble winner Charlotte Flair will not challenge Bayley for her title as she is reportedly facing WWE NXT Women’s Champion Rhea Ripley in Tampa this April.

Stay tuned for updates on Bayley’s Road to WrestleMania 36.