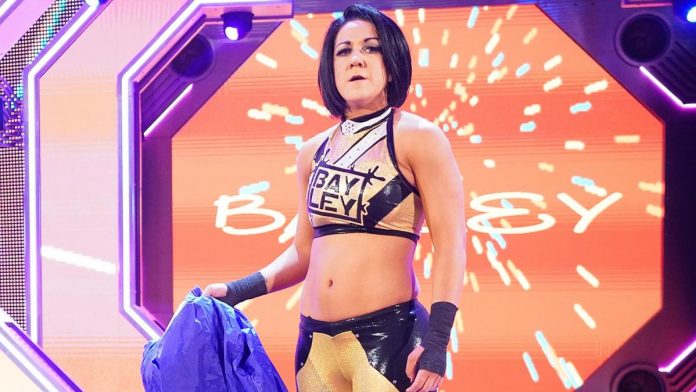 Bayley has called out WWE Hall of Famers The Bella Twins.

WrestleMania 37 Night Two featured a segment where Bayley interrupted the hosts on stage, Titus O’Neil and WWE Hall of Famer Hulk Hogan. Bayley went on ranting about Michael Cole, WWE Legends and others, until the music hit and out came Nikki Bella and Brie Bella. Bayley took shots at how they look and taunted Nikki, saying she was sorry to inform her that John Cena wasn’t there that night. Bayley tried to get physical with The Bellas, but they dropped her and tossed her down the ramp. The Bellas then stood tall with Titus and Hogan to end the segment. Fans have speculated on a possible return feud for The Bellas against Bayley since that WrestleMania segment.

In an update, Bayley appeared on WWE’s The Bump this morning and asked about possibly getting back at The Bella Twins soon. She then called them out. She said-

“You know how many videos that I had to see after WrestleMania of people adding music to that roll?,” Bayley asked after pleading with the hosts to stop the replay. “You know how embarrassing that was? You hear those fans booing in the crowd? That’s right, that’s because it was ridiculous. So, Bella Twins, this won’t be the last time that we see each other because you embarrassed me and on one of the hardest weekends of my life. You embarrassed me and put a little salt in the wound. So, I’m not going to forget that, Bella Twins, yeah, I’m calling both of you out.”

Nikki and Brie have not responded to Bayley’s comments as of this writing.