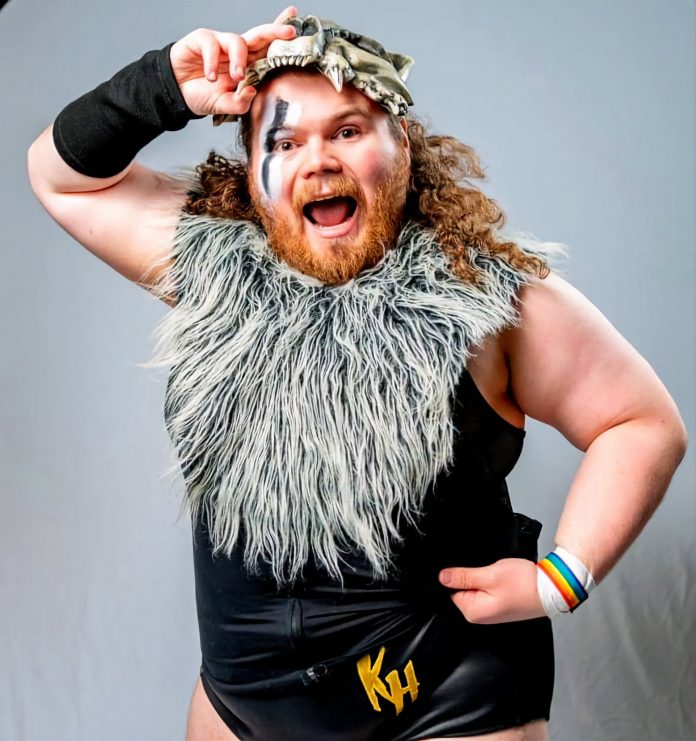 “I remember being five or six years old watching Undertaker vs. Mankind, and I was hooked.”

When journeyman Mick Foley, who had glimpses of national exposure in the earlier-90s in WCW, was signed to the WWF in 1996, many in the sports entertainment world questioned if he could be a top act in the industry. Famously, the emperor of sports entertainment, Vince McMahon was resistant to the idea because Foley didn’t fit the mold of a typical superstar. Jim Ross, an avid Foley supporter from seeing him under his Cactus Jack persona a few years prior, was able to ink the wild wrestler to a contract to set up a rivalry with The Undertaker.

The feud and its moments inspired a generation.

Keith Haught, a West Virginia-based grappler, was that youngster that saw the mayhem play out on their television. As time went on, they were hooked on the squared circle and consumed as much of the sport as they could find, including the discovery of Japanese wrestling through their college days. When the chance to learn the ropes presented itself, Keith couldn’t say no, and in the process, met some best friends through the pursuit of the ring.

Just like Mick Foley, Keith wasn’t a bodybuilder and had a unique frame. Keith shared a few more qualities with the former IWA Japan King of the Deathmatches. Keith had a charisma all their own and and endearing quality that made them a favorite among peers during the course of their career.

However, the start to their path to the ring wasn’t anywhere near as glamorous as those Undertaker/Mankind bouts that inspired them.

“It was rough, but a fun experience. We would do most of our training on gym mats in an old college gym. We would work on mostly chain work and psychology. When It was time for a show date, we were able to get a good amount of ring time since the ring was set up early at KSWA and other promotions. That is where we could learn the rest of our trade. The main lessons, I would say, we learned were to always focus on psychology and never stop learning,” Keith said of their earliest exposure to the canvas.

Grimey mats offered no glitz as the group of wrestling pals meticulously practiced the techniques taught to them by the trainers, Vinnie Stone and Alex Arcadian. The athletes that would go on to become staples of the tri-state area Edric Everhart, Tyler Cross, Tony Johnson, and Jay Flash joined Keith for these sessions. It wasn’t uncommon for the friends to pile into Keith’s Jeep to make it to an event hours before the doors opened just to get some ring time. After the collection of competitors made their pro debuts in 2010, that same Jeep would be crammed with wrestlers and their gear bags. In the early years, the friends would wrestle on small cards around the region on a Saturday night before they zipped back to college to study for an exam on Monday.

“I have pretty much been a local PA, WV, and OH guy for my 12-year career, but I’m still working on trying to get out more and expand. I think with the start of the pandemic, I hit a hard stop for awhile, but now things seem to be picking up much more and I’m happy for it,” Haught explained.

The late-night car trips and gas station food after a merger payoff early on in their career offered Keith valuable experience and it wasn’t long before their profile began to pick up around the circuit, prompting memorable opportunities over the past decade. A combination of the previously mentioned endearing trait mixed with a solid in-ring foundation and a unique in-ring persona made Keith a standout star over the years.

“I would eventually mold it to become more of an inspiration from anime, video games, comics, and cryptids. I wanted to combine elements from characters like Wolverine, Koga from Inyuasha, and San from Princess Mononoke. I wanted to make a persona that would be animalistic and cunning, but could also stay goofy if needed. I love the way it has grown over the years,” they said of their in-ring presentation.

Keith’s success over the years saw them share moments with national stars like Rikishi, Hillbilly Jim, Booker T, Zack Gowen, and others. Of course, they also had the chance to share championship wins with friends, some of those same buddies they met during those primitive training sessions in the college gym.

“I’m happy to have had so many wonderful moments with my fellow training class along the way. I’m very proud of all of them,” Keith commented.

A couple of awesome photos from last night! So much love for the fellow Pittsburgh Crew! Always a fun time at @PoserWrestling! 💜😻 pic.twitter.com/I6mkaLc0po


But being a public performer had its pressures, even for someone like Keith that was always greeted with cheers from the crowd.

“I would say I definitely have a unique look for sure and having a low center of gravity has worked out with using leverage using strength in the ring. I’ve been praised that I move well despite my size so that is another positive. I would say the negatives I face are that it’s definitely been a stigma in wrestling being short and having a bigger body. I do constantly deal with dysmorphia. I’m trying everyday to find acceptance in my body and keep training to stay in ring shape,” they commented.

It's so wild how time flies. It has been 7 amazing years and I have no doubt we will have many more! I love you so much sweetie. For ever and always! 💜😘😊🧡 #happyanniversary #7yearsoflove pic.twitter.com/DS07QcBMHt


Thankfully, the support of the fans and peers helped Keith embrace themselves, announcing that they were non-binary last year. With the confidence to live as their true selves, Keith looks to use the stage of pro wrestling to promote inclusion and education of those topics.

Happy #NationalComingOutDay ! 🏳️‍🌈 It felt amazing to come out earlier this year. I felt like I was truly being my full self for the 1st time. As always, don't ever feel pressured to come out. Everyone's journey is different. 💛🤍💜🖤#Enby #Pansexual #lovealwayswins pic.twitter.com/5J9RQJbhX6


“I wish to show representation in our business and making it normalcy. Wrestling has historically been bad with its treatment of some groups, but it has come along way in changing for the better and we still got more to do. I really want to keep getting better and keep growing as a performer. I definitely think I have grown both as a performer and person. Wrestling honestly has made me a better person and learn so much about life. I’m so glad to be apart of it,” they said enthusiastically.

All those years ago, Foley showed that it’s okay to be different and it’s okay to be yourself. Those differences, regardless of what they are, are what makes each person unique. Keith Haught’s unique presentation, in-ring style, and genuine appreciation for the support they receive are all a part of what makes them the athlete that they are in the ring. Furthermore, Keith uses their platform as a pro wrestler to let others know, it’s okay to be yourself, too. After more than a decade, this special athlete keeps moving forward with a combination of passion and dedication to the ring.

“Japan is the dream,” they concluded.